CORK PUBLIC MUSEUM – Creating a Future for Cork’s Past

Since opening in 1945, Cork Public Museum has actively collected, exhibited and cared for a wide range of objects related to Cork’s diverse historical heritage. The present collection is made up of about 40,000 objects covering a variety of subjects from archaeology and natural sciences, to the political, cultural and social history of Cork city and county. In addition to the accessioned material, Cork Public Museum currently has loans from institutions such as UCC, the National Museum of Ireland and many other private individuals. Approximately 9-10% of the collection is currently on long-term loan from other institutions or individuals.

The Museum collection can be categorised under the following headings: Archaeology; Civic History; Social and Economic History; Political and Military History; Natural Sciences; and Photographic/Image. Below is a sample of the objects in our collections, showcasing the extent of these categories.

Archaeology has always been an integral part of the collecting ethos of CPM. The museum’s first curator, M. J. O’Kelly (1945-63), was also Professor of Archaeology at UCC during his tenure here. The museum continues to exhibit the material from the many excavations carried out by O’Kelly and his colleagues throughout Cork and Munster. Indeed, artefactual assemblages from excavations carried out since 1945 form the largest portion of our archaeological collections. The following periods are represented in the collection: Mesolithic, Neolithic, Bronze Age, Early Medieval, Later Medieval, and Post Medieval. It is estimated that the museum currently holds 25 – 30,000 archaeological objects, ranging from isolated finds/acquisitions, to large assemblages of material unearthed in the hundreds of excavations conducted in Cork over the last sixty years or so. There are also examples of archaeological objects that had once resided in private ownership.

(Above) General view of the museums archaeological display cases.

The numerous excavations conducted in Cork City since 1984 have produced a multitude of finds including, but not limited to: pottery; animal/human bone; metal; glass and wooden artefacts; as well as leather objects and textiles. The excavations were conducted by the Archaeological Services Unit, the Department of Archaeology UCC, as well as by a number of other private archaeological companies in collaboration with Cork City Council. The excavated materials came from a wide variety of sites spread across the city, and cover the period of occupation in the city from the late 10th to early 18th centuries.

(Above) General view of the archaeological cases at Cork Public Museum.

The wide variety of objects detail many facets of the lives of the Cork’s inhabitants during this time, including trade, commerce, lifestyle and culture, and have provided excellent information for archaeologists and researchers on the origins and development of the city. In fact, the most recent excavations on South Main Street have provided the first firm and concrete evidence for the earliest Viking settlement, and of the Hiberno-Norse origins of Cork.

In the summer of 1945, an important ringfort site was excavated by M. J. O’Kelly, first curator of Cork Public Museum and Professor of Archaeology at UCC. In total, circa 600 objects are currently in the care of Cork Public Museum from this excavation. The range and quality of the objects is staggering and includes exquisite glasswork, metal tools and objects, crucibles and a myriad of stone artefacts. It is obvious from these finds that the site’s occupants engaged in high quality craft working and artisan activities. This is exemplified by Garryduff’s most famous and important find, the Garryduff Gold Bird.

Another excavated site whose finds form part of the museum’s archaeological collections is Garranes Ringfort, which was excavated in the late 1930s. In total, circa 1,600 objects are stored/exhibited at the museum. It is clear from the excavated material that a ‘workshop’ had been uncovered, with clear evidence of organised and high-quality craftsmanship. The vast majority of the artefacts are crucibles or crucible fragments.

Our natural history collection is a small, but interesting, assortment of extinct animal bones, ornithological specimens and geological samples. In total, this collection numbers about 400 objects. However, CPM does not actively seek these types of collections, and no natural history acquisitions have been acquired by the museum since the mid-1990s. 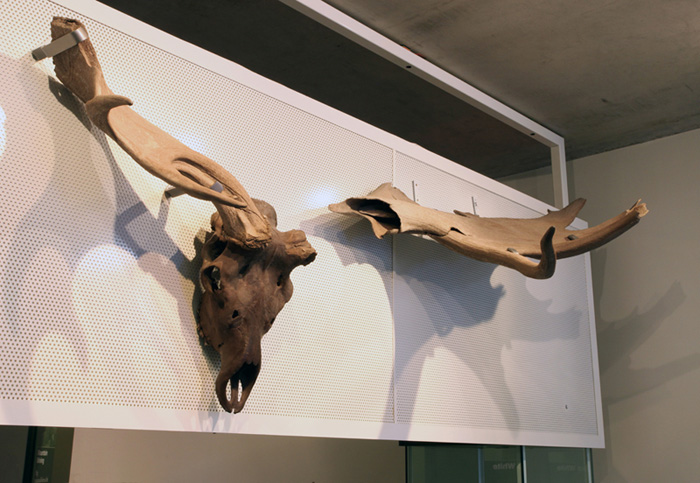 (Above) Giant Irish Deer, previously on display, but now in storage at CPM.

The most prominent objects in our natural history collection are the bones/antlers belonging to several Giant Irish Deer that were excavated in 1993 in the Wilton area, not far from the museum. There are about 50 bones/antler parts in total that include 4 skulls and several large fragments of antler. The majority of these biological remains are on permanent display.

We have 80 examples of ornithological taxidermy, and eggs from both native and foreign birds are represented in our collection. There are no examples of other animals. All these items are in full-time storage with no plans to display them in the foreseeable future.

The remainder of our natural history collection consists of about 300 or so geological specimens, half of which were loaned to the museum in 1986 by the Geology Department, UCC. The rest of the material is of unknown origin. The entire geological collection includes samples of different rock-types, fossils and minerals. Plans are underway to return these geological specimens to UCC, as there are no plans to include any geological displays at the museum.

Our historical materials make up over half of our total collection. These collections relate to the social, cultural, political and military history of Cork City and County (c.30,000-40,000). The range of objects included in this category comprises of documents, photographs and newspapers; arms, armour and uniforms; stone; flags; ceramics; coins; furniture; textiles and lace; silver; glass; and other miscellaneous types. They tell the story of the growth of the Cork from a burgeoning medieval town in the 1600s to a large 21st century city. Overall, the historical collections relate to the individuals, events and developments that have shaped Cork City for over 400 years.

(Left) Silver collar of the Order of St. Simplicius, presented to Maurice Roche, Mayor of Cork, by Queen Elizabeth I, for his able services in repelling an attack on the city in 1571 (detail).

(Middle) Ceremony of 'Throwing The Dart' by the Lord Mayor of Cork in 1855. From the Illustrated London News.

In 1185, King John granted Cork City its own charter, beginning over 800 years of municipal governance. A substantial collection of material related Cork’s rich civic and political history is housed at CPM. These include an assortment of objects from Cork’s original mid-18th century Mansion House (now part of the Mercy Hospital) and the city’s first City Hall, which was burnt out during the War of Independence. The collection also contains numerous official objects used in previous city councils, such as an Alderman’s badge, maces, swords and many presentations and gifts made to former mayors and Lord Mayors of Cork. One notable object is a silver collar of the order of St. Simplicius, presented to Maurice Roche, mayor of Cork, by Queen Elizabeth I, for his able services in repelling an uprising in the city.

The politically turbulent years of the 19th and early 20th centuries are well represented in the museum’s collection. These collections make up over half of our entire historical catalogue and cover the many individuals and organisations that helped create Irish Independence. The museum houses the personal and political effects of men such as Daniel O’Connell, O’Donovan Rossa, Michael Collins, Tomás MacCurtain and Terence MacSwiney. Artefacts relating to the various nationalist political organisations ,including the Irish Parliamentary Party, Sinn Féin, the Land League and the United Irish League, form part of this large and varied collection. The political collection is particularly strong around the 1918 general election and the formation of the first Dáil in 1919.

(Left) Cap and tunic from an Irish National Volunteers Uniform.

The museum’s military collection contains quite a large assortment of arms/armoury, including: rifles, revolvers, bayonets, swords, pistols, muskets, shotguns and ammunition. The museum also has a large collection of military-related objects such as uniforms, medals, flags, as well as documents, photographs and personal effects of the soldiers involved in the many conflicts inside and outside of Ireland during the 19th and 20th centuries.

From an Irish point of view, the collection is strongest for the period from the 1798 Rebellion to the Irish Civil War in 1923. The museum has objects and documents relating to the Young Irelanders, the Fenians, the Irish Volunteers and the Irish Republican Army. Central to these collections is the material connected with leading and influential Cork men and women involved in the local and national events of this period. 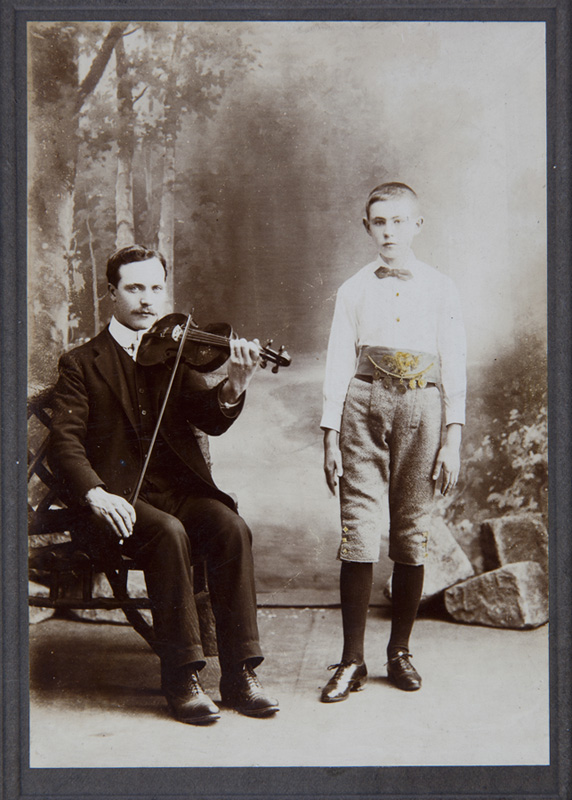 (Above) Portrait of Tomás MacCurtain and an unknown child.

This collection had been on loan to Cork Public Museum since the 1960s. It includes documents, artefacts and personal effects of Tomás MacCurtain who was one of the original founders of the Irish Volunteers in Cork, commanding officer of the Cork Brigade from 1913-1920 and the city’s first republican Lord Mayor. Last year, the museum, with support from Cork City Council, purchased this collection, as well as other material still held by the MacCurtain family. The collection also includes the papers and effects that belonged to MacCurtain’s son, Tomás Óg, a leading republican and member of the IRA Executive during the 1940s and the Border Campaign of the 1950s. 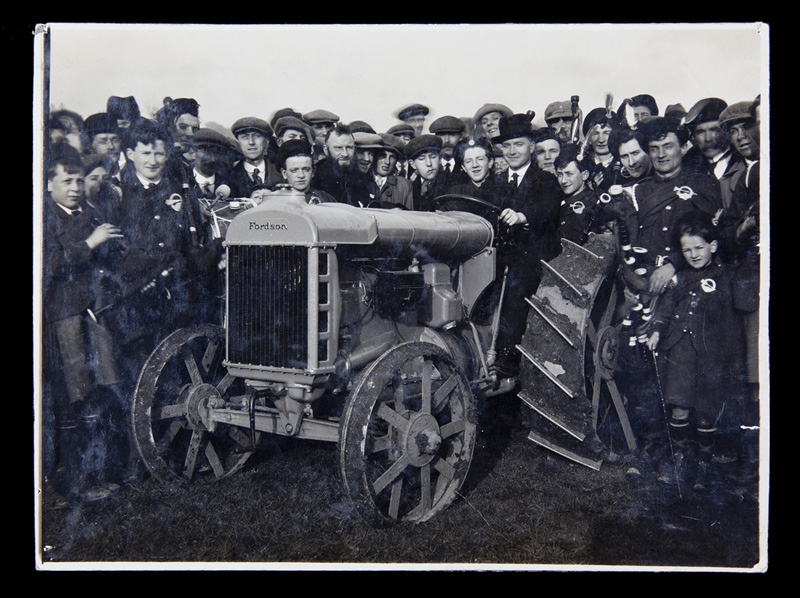 (Above) Lord Mayor Tomas MacCurtain on a Ford tractor

This collection has been on long-term loan from the MacSwiney-Brugha family since the 1960s. MacSwiney was the second-in-command chief organiser of the Cork Brigade of volunteers from 1914 until his death in 1920. He was also a playwright, poet and scholar, and acted as MacCurtain's successor as Lord Mayor of Cork following his murder in 1920. MacSwiney himself died on hunger strike in Brixton Prison in October. This collection contains MacSwiney's letters, notebooks, poetry, scripts, as well as many documents relating to his work as volunteer organiser during the 1915-1920. This collection also has material related to his sisters, Máire and Aine who played an important part in the nationalist movement in the city at the time. 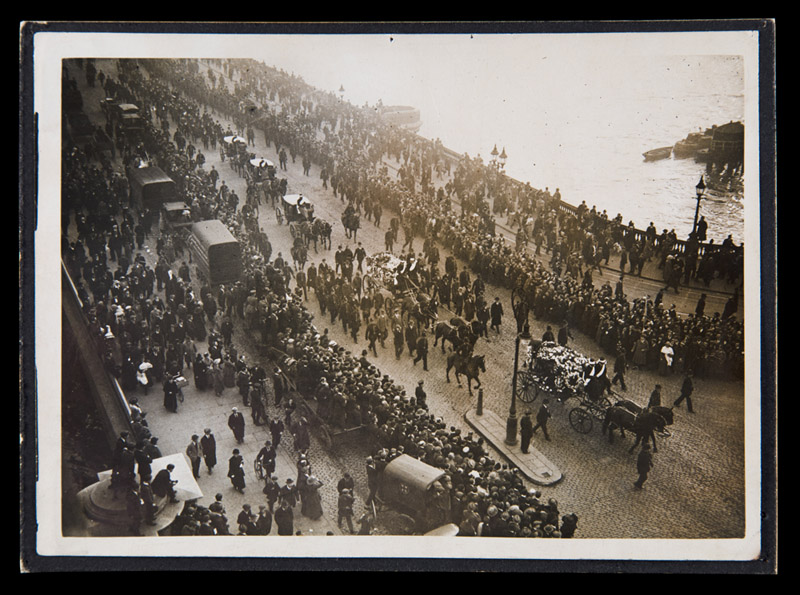 (Above) Terence MacSwiney's funeral procession through the streets of Brixton, London 1920. 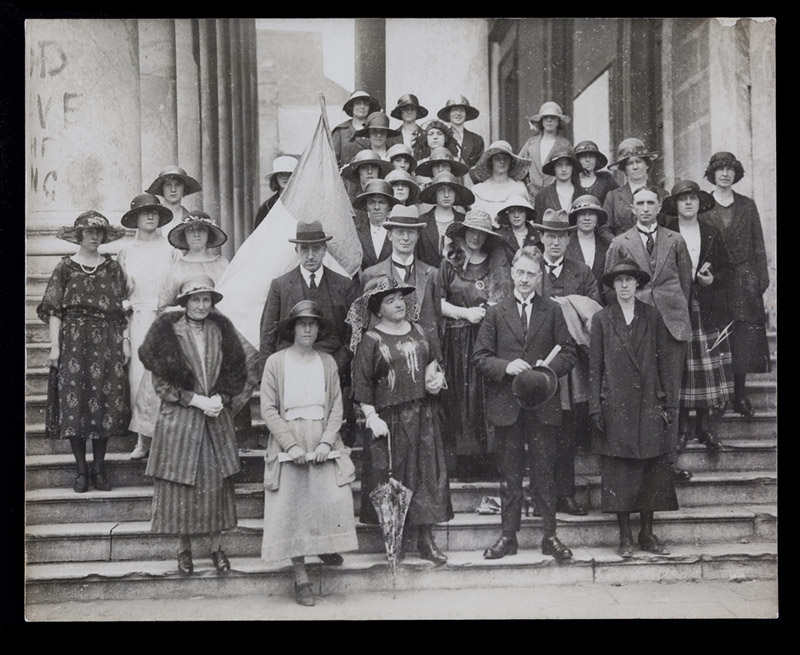 (Above) Cumann Na mBan group outside the courthouse with W.T. Cosgrave, President of the Executive Council, Washington St. Cork. (Note the graffitti on the left hand column, 'God Save The King').

This material consists of letters, minute books, photographs related to the work of sisters May and Lil Conlon, who were leading members of the Cumann na mBan in Cork. This archive is particularly interesting, highlighting the role women played in the events that led to Irish independence. This material was acquired by the museum directly from the family in 2007. 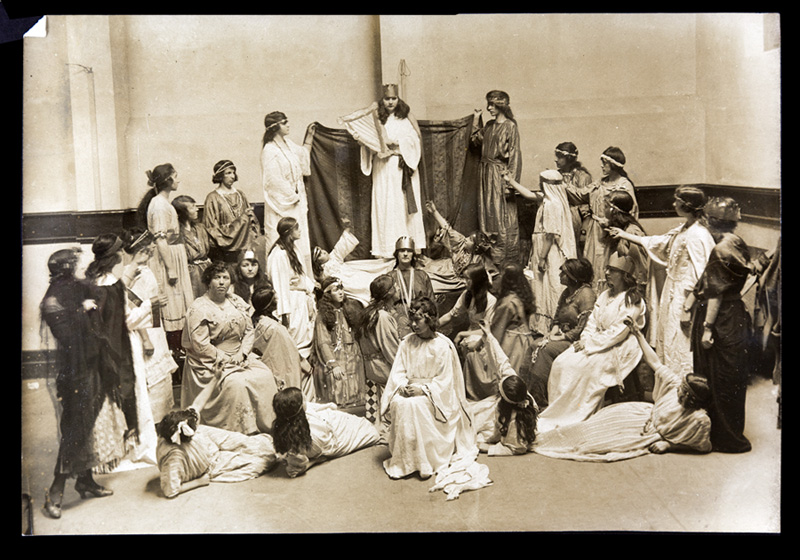 (Above) Cumann Na mBan group performing a tableaux for Michael Collins at the Opera House. 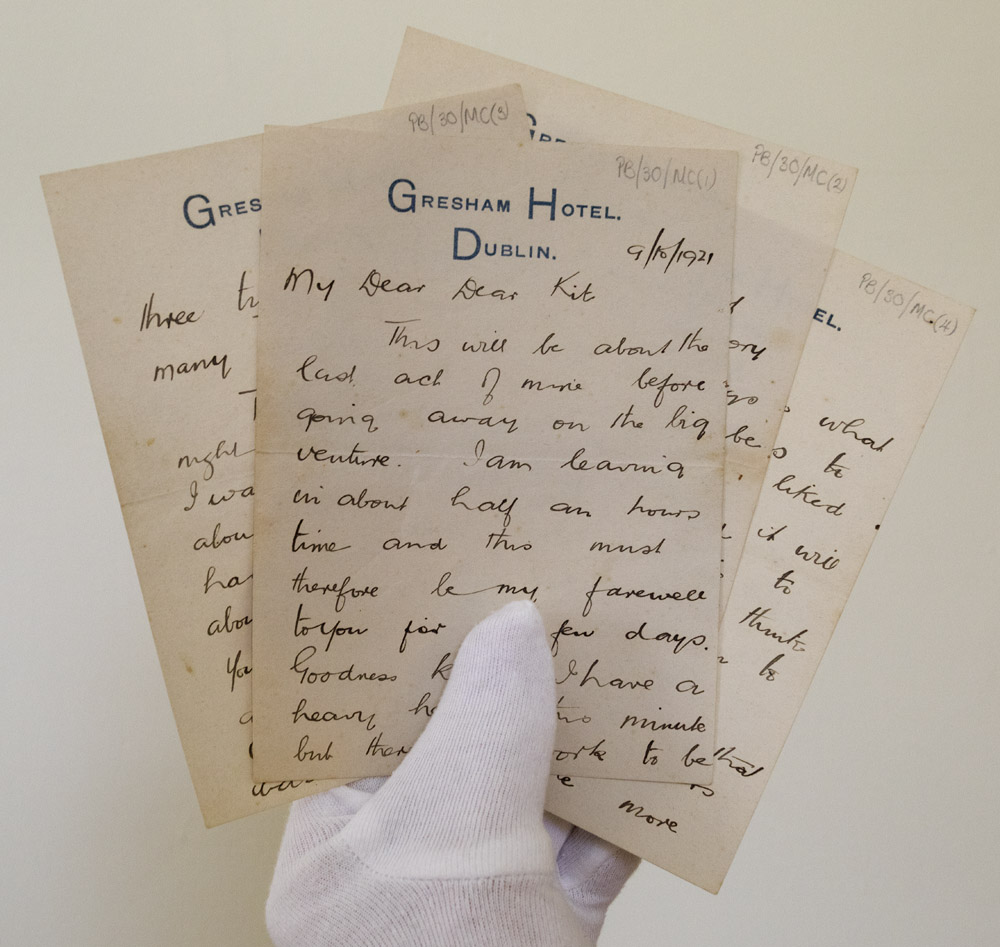 The museum has a small collection of Collins' personal possessions, including the hat he wore in the GPO in 1916. The most significant part of this collection is the 300 or so letters, telegrams and envelopes exchanged between Collins and Kitty Kiernan. The late former TD Peter Barry donated this material to the museum in 1996.

There are also many other smaller collections connected to other prominent individuals and organisations during this period, including Diarmuid Lynch, Roger Casement, Tom Barry and Tom Hales. The museum also has artefacts related to international wars in which Cork men were involved, such as the US Civil War, the Franco-Prussian War, the Boer War, WWI and WWII. 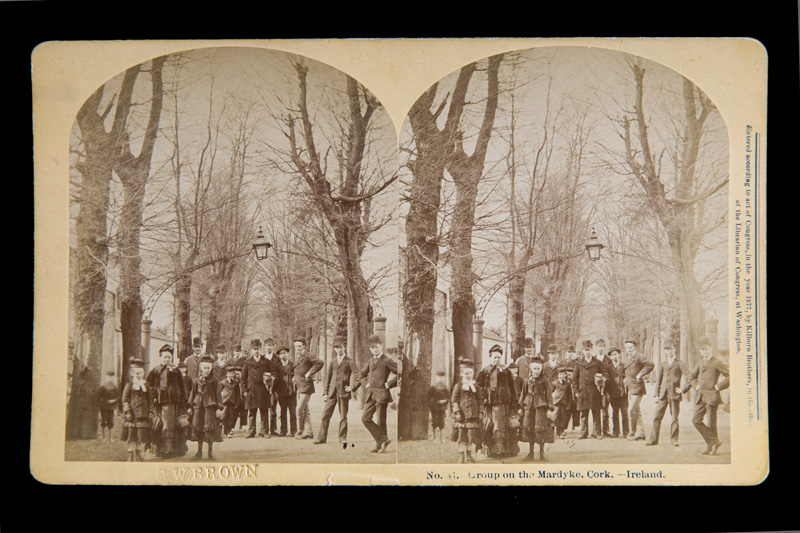 (Above) Group on The Mardyke. Stereo View. The Michael Lenihan Collection.