SUFFERING THE MOST – The life and times of Tomas MacCurtain and Terence MacSwiney. 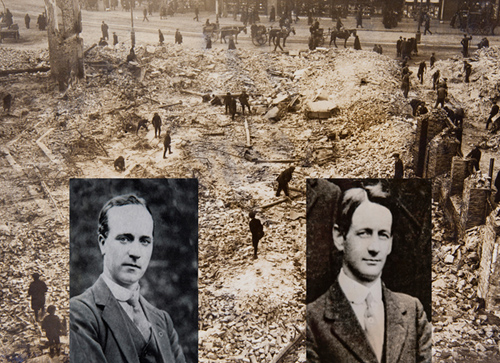 This exhibition tells the story of Tomás MacCurtain and Terence MacSwiney, Cork’s first Republican Lord Mayors. This exhibition will focus on aspects of their lives, achievements, and deaths, set against the backdrop of a country at war and a city in turmoil. The exhibition will also look at events such as the Cork Hunger Strike, the military and political campaigns in the city, the introduction of Martial Law and the series of arson attacks that culminated in the Burning of Cork in December 1920. The civic and military leadership shown by both men will highlight the pivotal role played by Cork during Ireland’s War of Independence.

This exhibition will run until March 2021. 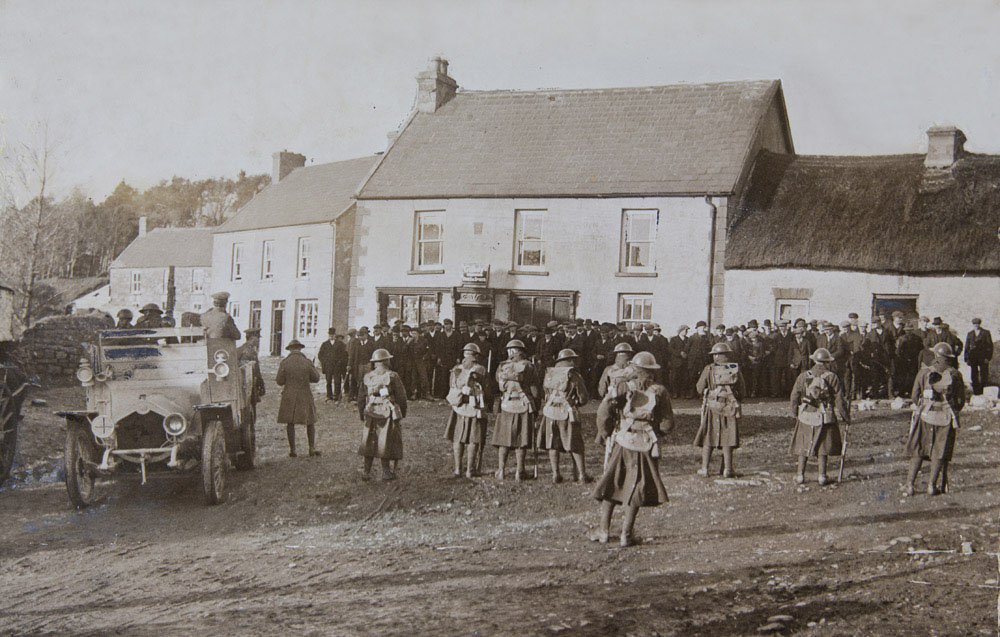 (Above) Reprisal at Meelin on the 6th January 1921, Co. Cork. The male population of the village was rounded up for questioning by British troops. The  Michael Lenihan Collection.

County Cork played a major part in the War of Independence, witnessing a number of military engagements that would go on to have a significant impact on both the nature and outcome of the conflict. Using original artefacts, images and documentation, this exhibition will illustrate the roles played by both the Republican and Crown forces, while exploring their strategies, tactics, equipment and experiences of war.

This exhibition will run until August 2021.

UNEARTHED - Discovering Cork; The City of Trades and Cultures. (work-in-progress)

(Above) Exhibition space in the process of being refurbished, Jan 2020.

In light of the recent important excavations on South Main Street, which have greatly increased our knowledge and understanding of the foundation and early development of Cork City, Cork Public Museum felt it is an ideal opportunity to refurbish and update our permanent archaeological exhibits.

Since the 1970s, urban archaeological excavation and research has opened up medieval Cork to contemporary audiences in ways not previously possible. Through numerous important archaeological excavations, the understanding of the origins of our city and the lives of its inhabitants are clearer today than ever before. Therefore, Cork Public Museum seeks to bring our city’s past to life through the lens of the latest archaeological insights, observations and artefacts combined with up to date historical research and knowledge.

The new exhibition will focus on the themes of 'Trade & Commerce' and 'City of Cultures', utilising various media, including original excavated objects, graphic panels, illustrations, audio/visual and low-budget interactives to enrich the visitor experience and reveal stories of Cork city and its earliest inhabitants.

One of the museum’s strongest assets is our archaeological collection, acquired from four decades of excavations in the city. These objects give glimpses into the everyday life and culture of Cork’s earliest inhabitants, and an insight into how they connected with the outside world. They show how the city grew from a marshy backwater into an important trading and commercial centre.

*****Please check the museum’s website (coming in January 2020) for updates and information on any other events and exhibitions that will be held at the museum during 2020.

As part of National Heritage Week, running from the 17th-25tg Aug 2019, Cork Public Museum - along with the Department of Archaeology at UCC and Craft Hands - conducted a fun one-day workshop with children at the museum.

Members of the public were invited to make their own clay vessel, and to learn about how pots can tell us about life in Cork's medieval past.

Staff from UCC were also on hand to demonstrate, with artefacts from the museum’s collection, how pots from all over Europe ended up in this city.

The exhibition examines the archaeology of the ancient forts of County Cork. It begins with the great Hillforts of the Bronze Age, dated 1400-800 BC. The ringforts of the early medieval period (AD 400-1200) are then presented, followed by coastal promontory forts that extend into later medieval times. The information in this exhibition demonstrates how ancient forts are an important and vulnerable part of our shared cultural heritage during a time of intense development of the Irish landscape. These sites are best protected by informing landowners and the public of their historic significance.

The exhibition is a collaboration between Cork Public Museum and the University College Cork Masters in Museum Studies programme.

1918 was a defining year: it witnessed the Allied victory in the Great War and the outbreak of the Spanish Flu pandemic, and it saw the resurgence of the Republican movement in Ireland that led to Sinn Féin's victory in the December 1918 General Election.

The exhibition examines these tumultuous events and the impact they had on the people and history of Cork.

This exhibition aims to highlight some of the findings from a recent excavation in Cork, with particular emphasis on the earliest excavated levels dating from the late 11th and the 12th century; the late Viking age or the Hiberno-Norse age - a period when the local cultural sphere experienced a mixture of Scandinavian and native Irish influence. This exhibition places particular emphasis on the wooden structures and items recovered from the excavations.

12th century Cork was essentially a wooden town; all the houses and many of the objects in everyday use were made from wood.

As it was not possible to offer public access to the excavations due to the restrictions pertaining to the construction sites, the exhibition aims to give the public a glimpse at some of the main findings. As the post-excavation analysis is at an early stage, the exhibition offers an archaeological preview which has the potential to be developed and expanded in the future.

The exhibition has been funded by BAM Construction and prepared by archaeologist Dr. Maurice Hurley and his staff, in conjunction with the students of the MA course in Museum Studies at the UCC Department of Archaeology.

In 2018, Cork Public Museum acted as one of the partners in the 'Tools of the Trade' art project that has been running since 2017. The project explores childhood creativity and interesting places of work, and is the brainchild of local artists Leah Murphy and Susie Walsh. This is a school-based programme, which connects schoolchildren with the workplace through art.

Over several months in 2018, 71 pupils from St. Marie’s of the Isle and Sunday's Well Boys and Girls Primary schools worked with the artists. The children taking part had the chance to see behind closed doors in three varied and interesting places of work in Cork City. Apart from the museum, the children also visited the Ceramic Department in the Crawford College of Art and Design on Sharman Crawford St., and the Cork Centre for Architectural Education on Copley St.

Introductory workshops were given where the children were shown tools that are in everyday use in these workplaces. On Monday 16th April, the school classes visited the museum where City Archaeologist Ciara Brett and Museum Curator Daniel Breen spoke to the school children about the work of archaeologists, and what excavated artefacts can reveal about the people who made them. The children could handle and inspect original excavated objects from Garryduff I Ringfort, including the iconic Garryduff Bird.

In a series of fun, interactive and educational art workshops, the children created artworks inspired by the specific activities encountered in each place of work. The artworks were then exhibited at the museum between June and September.

Travellers are an ethnic minority group indigenous to the Emerald Isle, with traditions and lifestyles that are rooted in its history.

The 1st of March 2017 was a historic day for the Irish Traveller community. Following a long campaign, the Irish government formally recognised Travellers as an ethnic group.

In a celebration of this historic moment, Cork Public Museum collaborated with the Travellers Visibility Group of Cork and Cork Traveller Women’s Group to highlight their community and the issues that affect them in contemporary society.

This exhibition presents the story of Cork's Jewish Community, from the 1880s to 2016. A small number of Jews who escaped persecution in Russia made their home in Cork's ‘Jewtown’; the Albert Road and Hibernian Buildings area in the south east of the city centre.

By 1939, there was almost 400 Jewish families living and working in Cork.

When the Cork Synagogue closed on the South Terrace in 2016, its custodian, the late Fred Rosehill gave a selection of its artefacts to the museum for permanent display.

We are happy to share, celebrate and acknowledge the important contribution this community has made to the history of this city.

In 2017, after 10 years of having the only dedicated permanent exhibition space highlighting Traveller culture in Ireland, we decided to revamp the exhibition to better reflect the concerns of this unique ethnic community in contemporary Ireland.

Spike - The History of an Island. (ended)

The UCC Department of Archaeology and the MA in Museum Studies Class of 2016, as part of their group exhibition project, held an exhibition in partnership with Cork Public Museum in 2016. The exhibition showcased recent finds from excavations on Spike Island and explored its complex and varied history.

This exhibition project focused on the history of Spike Island and it included finds from excavations undertaken on the island in the years since 2013, under the guidance of Dr. Barra O’Donnabháin, lecturer in the Archaeology Department, and in collaboration with The Institute of Field Research in California. Themes touched upon include the earliest monastic settlement on the island, and the island's various uses as a military fortification and prison complex in the 19th and 20th centuries, culminating in the recent excavations of the site. The exhibition made use of objects, text panels, interactive elements and an audio-visual presentation to engage the visitor and communicate the complex history of Spike Island.

In this exhibition, Cork Public Museum aimed to portray the background, progression, aftermath and legacy of the Rising in Cork through the personal testimonies, written documents and artefacts left behind by the participants. A key aspect of the exhibition was the exploration of the oft-forgotten stories of twelve Cork born men who took part in the fighting in Dublin. The most tragic of these stories belongs to West-Cork native, Sean Hurley, who was killed in fighting near the Four Courts. He was the only Cork man killed during the conflict. This exhibition therefore seeks to bring to life, through personal first-hand accounts, the contribution made by Corkonians to the Rising.

Though no fighting took place in Cork, there was a tense standoff between the Volunteers and British authorities at Volunteer Hall on Sheares Street during Easter Week. It was eventually resolved peacefully, and the Cork Volunteers vowed to never be left on the sidelines again. The lack of action during 1916 certainly played a large part in how the War of Independence was eventually conducted in County Cork, resulting in some of the heaviest and bloodiest fighting taking place here during the 1919-1921 period.

In commemorating the participation of Cork people in the Great War, a full scale trench was re-created for one of the exhibition spaces within the museum. The exhibition was held for the same duration as the actual war.

Working with expert model maker Keith Donnelly, who worked on Game of Thrones, a full size model of a WWI-era trench and an officers' ancillary quarters was installed in the museum.

The Great War was one of the defining moments of world history in modern times.

As Ireland was still part of the British Empire then, many Corkonians enlisted to fight in the conflict. From gas attacks, trench foot, constant bombardment and the ever present rain of bullets from machine guns, life on the front lines was very precarious and short.

In installing the Trench, we hoped to give the public a taste of what trench warfare was really like 100 years ago.

As a symbol of solidarity with those who gave their lives, the Trench was ceremoniously closed on Armistice Day on 11th Nov 2018 with a bugler from Collins' Barracks to play the soldier's ‘Last Post’.