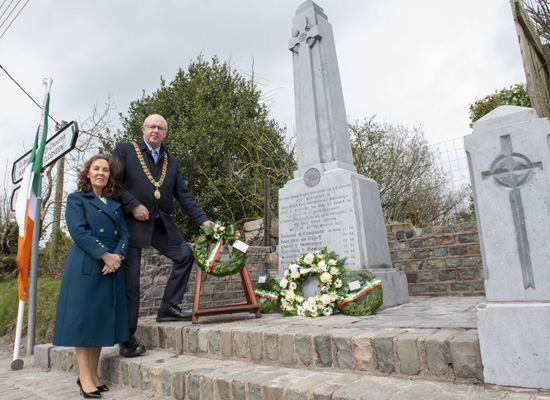 On 23rd March 2021, Lord Mayor of Cork, Cllr. Joe Kavanagh, laid a wreath at the Ballycannon Memorial in Clogheen, in commemoration of the six young IRA volunteers killed there one hundred years before.

On the night of March 22nd, 1921, six young men, Thomas Dennehy, Jeremiah Mullane, Michael Sullivan, Daniel Crowley, William Deasy and Daniel Murphy, members of the Blarney Street Company of the I.R.A., set out on the Blarney Road to reach the O’Keeffe family farm at Clogheen.  Their intended purpose of the unarmed men was to recover in the safe house on the O’Keeffe farm.

At approximately 4 a.m. on March 23rd, 1921, a large force of R.I.C. and Black and Tans had surrounded the farm and found the six men sleeping in the barn, all of whom were subsequently killed.

The Lord Mayor said: “It is appropriate that I lay a wreath here today in memory of the Ballycannon Boys.  It is Cork City Council’s aim that our commemorations reflect our pride in Cork and its people and the roles they played in the events of 100 years ago, pride in their heroic efforts, their resilience, honour the courage of the so-called ‘ordinary’ people who took part in the struggle, and their perseverance in the face of adversity.”

When public health advice permits, the Clogheen/Kerry Pike Community Association plans to commemorate the centenary with a walk around the farm in Ballycannon, to hold a talk by historian John Mulcahy and to publish a commemorative booklet. Benches dedicated to the six young men will be placed along the walkway around the GAA pitch at Ballycannon Park.

St. Vincent’s Hurling & Football Club and Unity Media will produce a thirty-minute documentary commemorating the story of the Ballycannon Boys. The documentary will include interviews with family members, local historians and club members giving their own perspectives.