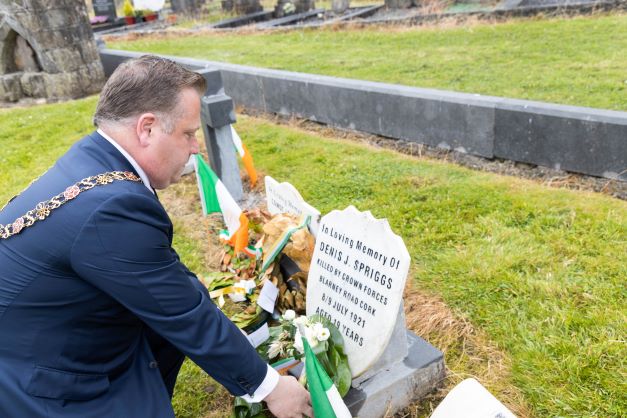 On Friday 9th July 2021, Lord Mayor of Cork Cllr. Colm Kelleher laid a wreath on the grave of Denis Spriggs, commemorating the centenary of his death at the hands of Crown Forces.

Volunteer Denis Spriggs was killed by British forces one hundred years ago.  He was a 19-year-old plasterer, who lived on Strawberry Hill with his parents, Mary and Denis Senior.  He was the oldest of their seven children.  Denis was a member of C Company, First Battalion, Cork No 1 Brigade of the IRA, in which he had served for three years. He was also an active member of the Cork branch of the Plasterers’ Union.

A British Army party arrested Denis Spriggs in his parents’ home at midnight on July 8th, and shot him dead on this spot shortly thereafter.  The military claimed he was shot trying to escape, an explanation the Crown forces often used to cover their unlawful killings of prisoners.  He is buried in the Republican Plot at St Finbarr’s Cemetery.