Former Lords Mayor of Cork, the Cathaoirleach of the Seanad, Oireachtas members, representatives of the Armed Forces, Naval Service and An Garda Siochána joined Government officials, members of the Expert Advisory Group on Commemorations and representatives of family members elected to Cork Corporation 100 years ago at a commemorative Special Meeting of Cork City Council on January 30, 2020. 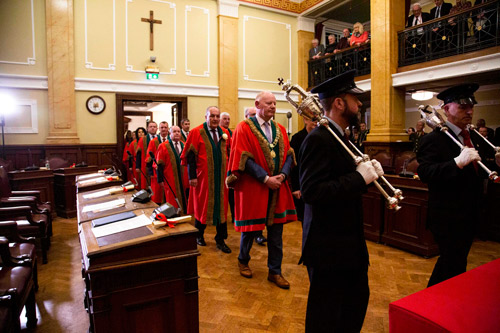 The meeting, which was attended by 146 guests from the worlds of politics, business and the community and voluntary sector, commemorated the election of Tomás Mac Curtain as Lord Mayor of Cork, the Council’s Pledge of Allegiance to Dáil Éireann, the extension of the right to vote to women ratepayers, and the use of proportional representation in an election for the first time. 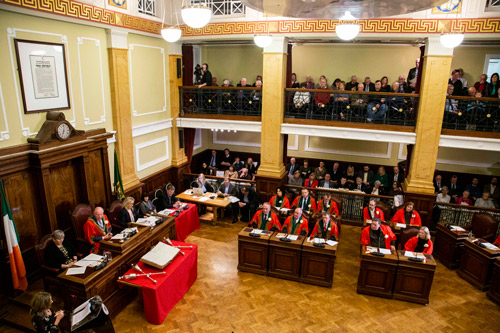 City Archivist, Brian McGee presented the 1920 minutes book to the meeting. Dr. John Borgonovo from UCC’s School of History and Dr. Fiona Buckley from UCC’s Department of Government and Politics spoke in the Chamber. 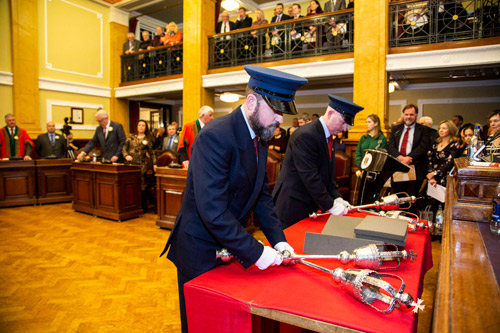 Mr Borgonovo said: “The republicans were a new force in Irish politics and its leaders had been largely unknown in the city prior to 1916. Their victory in the 1920 local elections was an expression of the public’s clear desire for Irish self-determination. The election in Cork was also connected to the rapid expansion of popular democracy in Ireland and in Europe in this period as seen by Cork Corporation’s 1920 election of its first female councillor and of an unprecedented number of labour and trade officials to the Chamber".

Dr. Fiona Buckley said: “Contemporary newspaper accounts, such as those in The Cork Examiner, spoke of considerable voter turnout ‘including many women’. Across Ireland a total of 1800 seats were up for election. Women won 42 of those seats including Anne Sutton of Sinn Féin, representing the North East electoral ward on Cork Corporation. 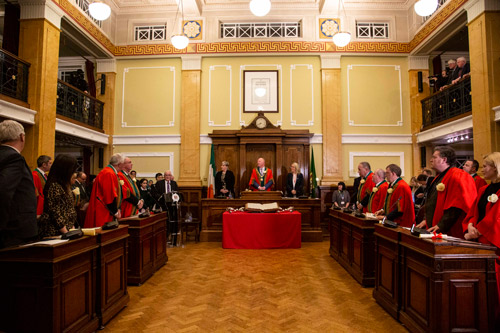 The presence of women in local council chambers across the country was a very welcome development, but as historian Dr. Margaret Ward of Queen’s University Belfast assesses, ‘hardly the “fair proportion” as claimed by the Irish Independent".

Representatives from Comhairle na nÓg, the trade union movement, the 50/50 group and from communities across the city also participated in the meeting. Sixteen members of the current council read extracts from the minutes of the meeting of Cork Corporation on January 30, 1920 and from local newspapers. 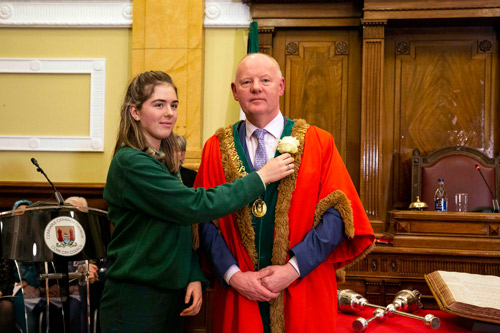 Harpist, Ruth McDonnell performed at the event, playing ‘Air to St Finbarr’ as part of her set while legendary Cork singer, Sean O’Sé closed the meeting with a rendition of ‘Amhrán na bhFiann’. 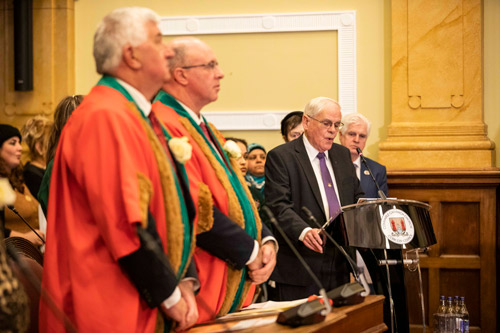