Witness to Murder by Kieran McCarthy and John O'Mahony 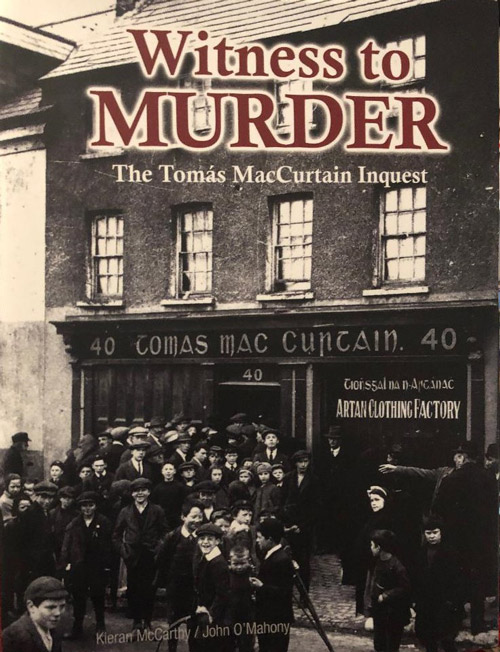 Published by 'The Irish Examiner', Witness to Murder by Kieran McCarthy and John O’Mahony is a transcript of the Tomás Mac Curtain's Inquest from March and April 1920. Tomás (1884-1920) is truly a colossus in Cork history who has attracted many historians, enthusiasts and champions to tell his story.

His story is peppered with several aspects – amongst those that shine out are his love of his family, city, country, language comradeship, and hope – all mixed with pure tragedy. In many ways, the murder of Tomás Mac Curtain on the night of 19-20 March 1920 changed the future public and collective memory narrative of Cork history forever.

The last time Tomás’ inquest in full was published was in the Cork Examiner between 23 March 1920 and 18 April 1920. Despite the ordeal and daily fallout from the interviews, over time the fourteen hearing sessions have not overly been revisited by scholars of the Irish War of Independence. The verdict has been highlighted on many occasions by many historians, but the information of the inquest has never been overly written about or the narratives within it explored.

Witness to Murder, The Inquest of Tomás MacCurtain by Kieran McCarthy and John O'Mahony (2020, Irish Examiner) at this moment in time is only available to buy online here.