Joint Policing Committees (JPCs) provide a dedicated forum to support consultation, cooperation and synergy on policing and crime issues between An Garda Síochána, local authority officials, and elected representatives and the community and voluntary sectors. A JPC operates in each City and County Council area of the State.

The role and function of the City Joint Policing Committee is to:

The statutory basis for the establishment of Joint Policing Committees is set out in section 35 of An Garda Síochána Act 2005, with revised guidelines for the operation of each JPC amended in 2014. The Policing Authority, established under the Garda Síochána (Policing Authority & Miscellaneous Provisions) Act 2015, hold general powers relating to the establishment and maintenance of the Joint Policing Committees by local authorities and the Garda Commissioner, which were previously held by the Dept. of Justice and Equality.

Each of the partners involved in JPCs has its own distinct perspective and inputs to offer, along with its own responsibilities in ensuring that society’s needs are effectively met to maintain safe and secure communities.

Each JPC is made up of:

(iv)  Members of Council and Oireachteas for the area,

More information on the national Joint Policing Programme can be found on the www.justice.ie and on www.garda.ie websites.

Cork City Joint Policing Committee launched a six-year strategy aiming to enhance relationships between the Local Authority, An Garda Síochána and the community, strengthening ties between the groups.

The strategy is the direct result of more than 12 months of consultation and sets out an overall strategy until 2021. It establishes a clear format of communication between the Local Authority, communities and the gardaí, including regular local forums to raise issues.

It includes a series of measurable goals, with specific aims reviewed on an annual basis. Speaking ahead of the launch, chief executive of Cork City Council, Ann Doherty, said: “The strategy will provide a framework for the work of the JPC and underpins the strong working relationship that exists between the City Council and An Garda Síochána at all levels.” 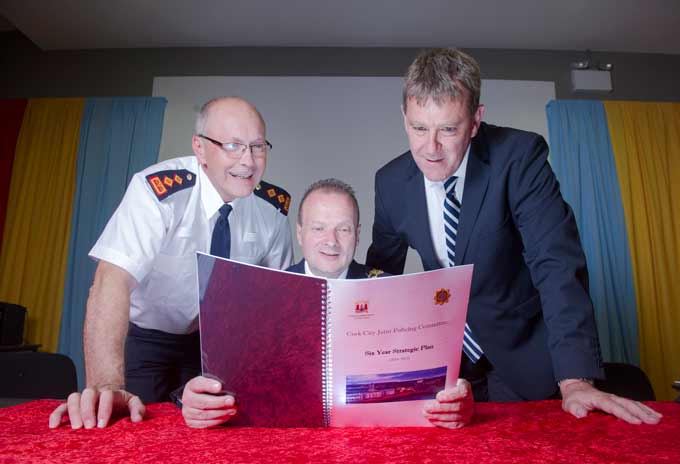 Minutes of the JPC Meetings can be found below: