Sports Capital Grants scheme put to good use by ‘The Barrs’ 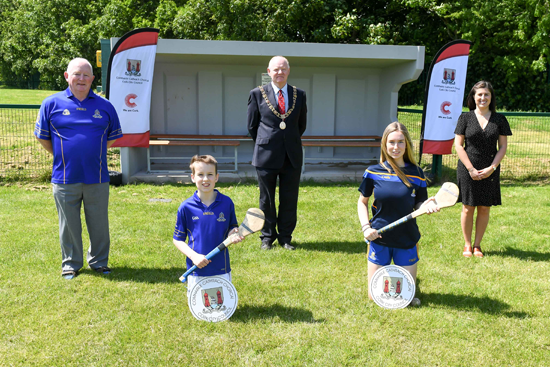 Lord Mayor of Cork Cllr. John Sheehan met officials and players on the grounds of St. Finbarr's National Hurling & Football Club last week to view the two new dugouts on the grounds, funded through Cork City Council's Sports Capital Grant Scheme. The scheme is aimed at providing grant aid to projects that are directly related to enhancing facilities and of a capital nature.

In 2019, €270,000 grant aid was offered through the scheme and one of the 66 clubs who put their grant to good use was St. Finbarr’s National Hurling and Football Club, based in the Togher area. This club, locally known as The Barrs, with its royal blue and gold strip, was founded in 1876 and currently operates from grounds donated to them by Cork City Council. The club received €8,000 and put it to good use by erecting two dugouts on one of their pitches.

The Lord Mayor commented “We are all too familiar how difficult recent times have been, but it has also shown the amazing community spirit and civic responsibility in Cork City typified by volunteers such as those running sports clubs and organisatons all over the City. Also, it's vital to stay healthy in body as well as mind and the Council’s Sport Grants play a big part in this.”

The Chairperson of St. Finbarr's, Denis Bohane, said “Thanks to Cork City Council for their support. Grants like this greatly help clubs like The Barrs to offer better facilities to the youngsters in the area.”

Over the years this scheme has assisted all types of clubs and organization such as rowing, cricket, and athletics to name a few. The 2020 Scheme was announced in January and applications are awaiting approval by Cork City Council.

The scheme is not intended as an alternative to any other sources of funding, but will complement any other schemes, helping with local contributions to satisfy criteria of other funding agencies, or assisting with funding where certain works are not covered by other grant schemes.

The scheme operates under two pillars - Minor Sports Grants (Under 5k) and Major Sports Grants (€5k - €10k).  The Minor Grant allows for minor capital grants towards enhancement of premises, pitches etc., as well as allowing for the purchase of non-personal sports equipment that will be used for at least five years.  The Major Grant allows for capital grants to develop sport and active recreation facilities throughout the City.