Official Opening of The Peoples Parklet

The Peoples Parklet on Douglas St will officially be opened later today Wednesday, July 24th. The Parklet is the ultimate city centre ‘chillzone’.

The project was brought to life following a funding application by the Cork Transport and Mobility Forum (CTMF)  to Cork City Council’s City Centre Placemaking Fund.

According to CTMF, the People’s Parklet is an “amenity combining elements of seating, green planting, art and bike parking, it offers an alternative experience of the city and the street. It is an open and public space that invites residents and passers-by to interact, and to foster a sense of place, community and environment”.

Lord Mayor, Cllr John Sheehan said: “There has been a great reaction across the city to the parklet and there was remarkable partnership between groups to deliver this particular project. The City Centre Placemaking Fund is aimed at supporting projects which will enhance, improve, and enliven people’s experience of Cork city centre, increase footfall and support the local economy”.

The parklet is moveable and will be in Douglas street until the end of September. The Transport and Mobility Forum and Cork City Council will consider requests from any local groups in the city centre who wish to locate the parklet on their street and who will support it on a day to day basis.

Other City Centre Placemaking-funded projects include the space exploration-themed mural at the Cornmarket Centre by Irish street artist, Shane Sutton (of the Walls Project). Led by Blackrock Castle Observatory, this was installed as part of last weekend’s Apollo 11 anniversary celebration.  The fund also brought about Curtis Hyltons stunning mural of a kingfisher with plastic in his beak at the entrance to Paul Street carpark.

La Cocina Publica, the pop-up Chilean dining event, held during the Cork Midsummer Festival was also made possible by the Placemaking Fund. As diners enjoyed supper alfresco, Chilean and Cork artists, storytellers, singers and musicians provided entertainment. The Cork City Centre Placemaking Fund also helped Cork Community Artlink bring the ‘Mr Everybody’ to the Grand Parade and to landscape and provide seating in the front garden of St Peters on North Main Street. 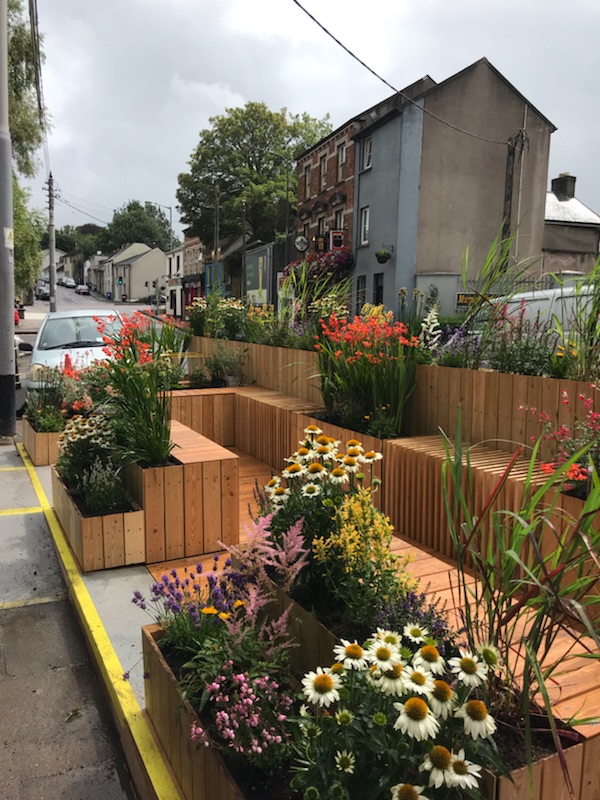