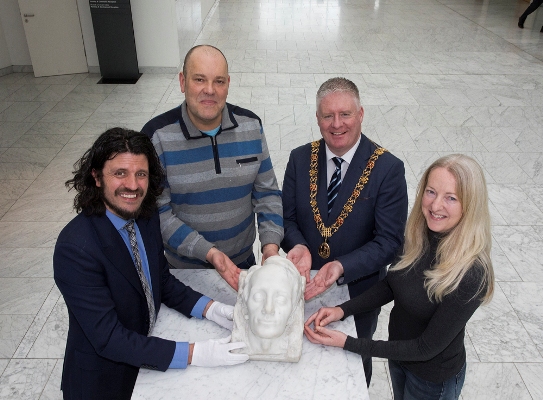 Cork City Council today was delighted to receive presentation of two highly significant artefacts of the War of Independence period in Cork City.

The Terence MacSwiney marble bust and a Cork Republican Silver loving cup were presented to Lord Mayor of Cork, Cllr. Mick Finn today in Cork City Hall, and will now go on display as part of the permanent collection in Cork Public Museum in Fitzgerald’s Park.

The Terence MacSwiney bust, sculpted by renowned Irish sculptor Albert Power, was generously donated to the City by the family of Cork’s first female Lord Mayor, Jane Dowdall. Deborah Dowdall and Tom Dowdall, her grandchildren were present today at City Hall for the formal handover. Power sculpted the bust from a death mask he had made of MacSwiney’s face, after his death on 25th October 1920, following 74 days of hunger strike in Brixton Prison.

The bust is a very unique and important piece, as for many, this portrait captures the serenity and acceptance MacSwiney had about his death.  It seems as if MacSwiney is gently smiling in the knowledge that his death would play a pivotal role in securing independence for Ireland.

The second piece is a Republican silver Loving Cup, made by William Egan of Cork. There are only about 60-80 pieces of Cork Republican Silver known to exist so this is a particularly important acquisition for the museum.

During the War of Independence and Civil War, it was not safe to send silver produced in Cork to Dublin to be assayed to determine its silver content and quality. Instead Cork silver makers stamped their own silver with a hall mark of a ship between two towers, commonly found on the Cork Coat of Arms. This object was purchased using funding from Creative Ireland.

Lord Mayor of Cork, Cllr. Mick Finn said: “These two artefacts are hugely significant links to the history of Cork and the birth of a nation which will come more and more into focus as the decade of centenaries start to centre on the War of Independence and Civil War period. The role of iar ardmhéara Terence MacSwiney in those events was known internationally following his death on hunger strike in London. That the city now owns a sculpture of Terence MacSwiney’s death mask – which is both extremely startling and poignant to view – is so significant at a time when we need to invest in our history. The new Revolution series on RTÉ, in conjunction with UCC, is a timely such investment which will hopefully ignite the flame of interest in such a formative period.”