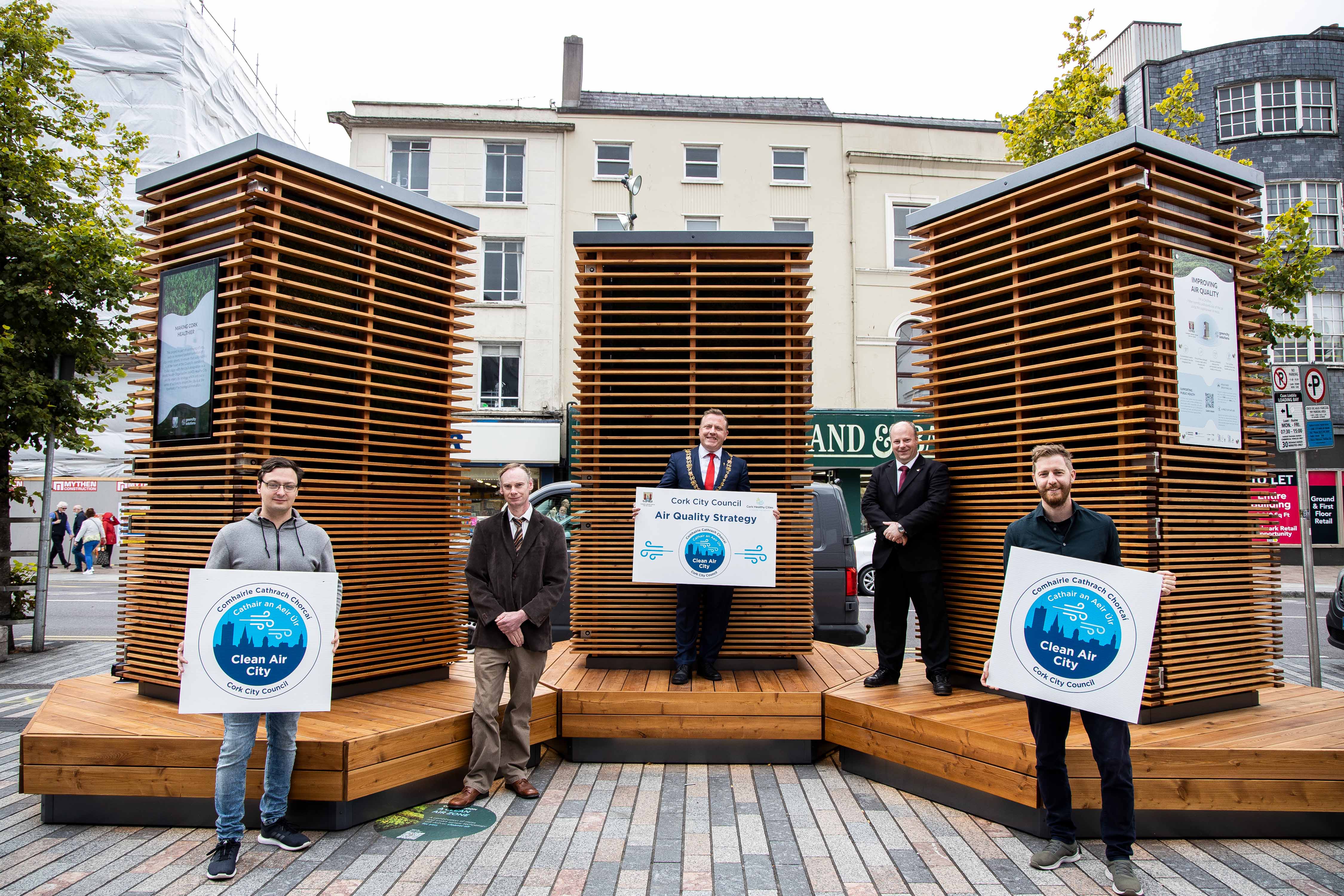 The Lord Mayor of Cork, Cllr Colm Kelleher today launched the Cork City Council 2021-2026 Air Quality Strategy at one of the two city centre locations where five ‘CityTrees’ have been installed.

Cork City Council is the first local authority in the country to devise such a strategy and this follows on from the delivery of a high-level air quality monitoring system across the city and the introduction of an ambitious city centre pedestrianisation programme over the past year.  Over €2 million has been invested in cycling infrastructure including the addition of over 20km of new and improved cycling lanes and the installation of 4km of bollards to make cycling safer and more attractive. The National Transport Authority has committed €3.5bn as part of the Cork Metropolitan Area Transport Strategy to the development of world-class sustainable transport solutions in Cork.

The Air Quality Strategy sets out short, medium, and long-term initiatives to improve air quality in Cork City including proposing:

The 4m tall units are being installed at St Patrick’s Street near French Church Street and on Grand Parade near Cork City Library. Using Internet Of Things (IOT) technology, these pieces of smart street furniture are covered in a mixture of moss cultures that filter harmful pollutants out of the air. Each ‘CityTree’ can filter the air usage equivalent of up to 7,000 people per hour.

The ‘CityTrees’ project is part of Cork City Council’s continued efforts to improve the city’s air quality by combatting fine dust, particle pollution as well as other pollution associated with traffic congestion. Fine dust consists of a complex mixture of tiny particles with a diameter of less than 2.5 micrometres harmful to humans and is linked to lung and cardiovascular problems. Air pollution is responsible for up to 1,300 deaths in Ireland each year, according to the EPA.

Air purification is achieved when the specialised culture of moss absorbs air pollutants such as particulate matter (PM) and nitrogen oxides (NOx) and emits clean air. The moss acts as a filter to ‘trap’ and ‘eat’ fine dust making it a sustainable and regenerative fine dust filter. Scientific studies conducted by the Institute of Air Handling and Refrigeration in Dresden show that the moss cleans about 80% of fine dust from the air.

Lord Mayor of Cork, Cllr Colm Kelleher said:  Up to 1,300 people are believed to die prematurely each year from air pollution. The ‘CityTrees’ project will really start the people of Cork talking about the wider impact of air pollution. This project is associated with ongoing efforts to ensure that sustainability is at the heart of the Council’s operations and future growth as witnessed by the Government’s €3.5 billion investment in sustainable transport in the city via the Cork Metropolitan Area Transport Strategy (CMATS) and the recent pedestrianisation of the Marina and  city centre streets and our ongoing investment in our cycling and pedestrian infrastructure”.

Director of Operations, David Joyce said: “The City Trees provide a site-specific solution to the challenge of air pollution and are one of a suite of actions in Cork's Air Quality Strategy. Air pollution is a public health concern and Cork City Council is the first local authority in the country to progress such a strategy. They also align with the city’s designation as a World Health Organisation (WHO) Healthy City and its smart city strategy which sets out a series of actions to ensure the city is at the forefront technological innovation”.

‘CityTrees’ also acts as an attractive piece of street furniture or meeting point and are in place in London, Berlin and Glasgow.

In a recent public survey conducted by Cork City Council on attitudes towards air pollution, 97% of the 744 respondents deemed air quality as important or very important while 47% of those answered the survey are most concerned with air pollution from traffic,” he added.

For more information on the CityTrees initiative, please visit: www.corkcity.ie/corkcitytrees