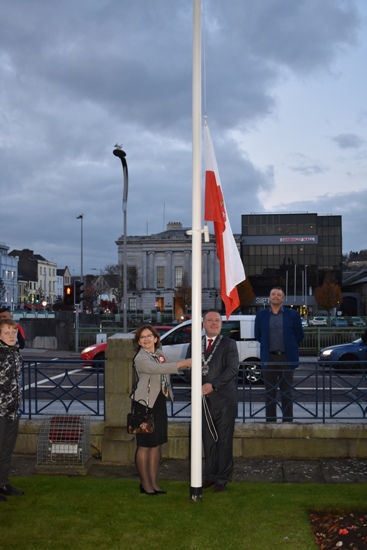 Polish charity Together-Razem Centre, with the support of Cork City Council’s Social Inclusion Unit and the Embassy of Poland in Dublin, are holding their second annual Polish Day to mark the Anniversary of Polish Independence.

The free event “All Together for Independence” kicked off on Friday 8th November 2019 just before 5.00 p.m. with the Polish flag being raised at the City Hall. The celebrations are hosted by the Deputy Lord Mayor of Cork in the Council Chamber and amongst the guests in attendance are the Minister of State, David Stanton, her Excellency the Ambassador of Poland to Ireland Anna Sochańska, and leaders of Polish community in Cork.

The City Hall will be illuminated by white & red lights for the commemoration of Polish Independence and an exhibition on the Polish people who fought in the Second World War will be officially opened by the Lord Mayor and displayed in the City Library on Grand Parade.

The exhibition called “Fighting and Suffering” is an international project by the Museum of WW II in Gdańsk and the Ministry of Foreign Affairs in Warsaw. Attendees of the event will also have an opportunity to see a short performance about Poland prepared by the children from Polish School “Razem Academy”.

A Polish folk dance group from Ennis “Inisowiacy” will present traditional Polish dances, such as Polonez, Krakowiak, Kujawiak and Oberek, dressed in beautiful folk costumes. There will also be an opportunity to sample some delicious traditional Polish food.

The Lord Mayor of Cork, Cllr. John Sheehan said: “We are delighted to host Polish Independence celebrations here in City Hall for the second year running. The Polish community in Cork is such a lively and engaged part of our city, and we have so much in common, including great pride in our respective national heritages and history.”

Voyteck Bialek, Together-Razem CEO said: “The Poles live and work here. Their children were born in Ireland but at the same time they want to maintain their heritage, their mother tongue, culture and traditions. Therefore, it is very important that the City Council supports diversity and helps to organize events like this one. As the President Michael D. Higgins highlighted during the Intercultural Garden Party “Cloth has more than one string”. We feel welcome here and wish to maintain good relations with our Irish friends.”

It is estimated that almost 25,000 Polish people live in Cork City and County which makes the Polish community the biggest minority group, not only in the county, but also in Ireland in general. The Polish community is very vibrant and active in Munster region. There are many Polish clubs and groups, Polish schools, shops and small businesses and they all enrich the social and cultural fabric of Irish society.

On the 11th November 1918 Poland re-gained their independence after the First World War and, similarly to Irish people, the Polish are very proud of their heritage and history.

Together-Razem Centre, the main organizer of the events, provides support to the Polish and East-Central Europeans migrants since 2006 offering them a wide range of services to help them integrate better with the Irish society and at the same time to maintain respect and memory of their roots and traditions. Together-Razem operates in 4 key areas: