Riverstown National School, Glanmire, Co Cork, was presented with a special Marine Institute Explorers Ocean Champions Award for their participation and outstanding achievement in creating a healthy ocean project where the children created the schools Christmas decorations from recycled plastic.

The award was presented by Elisabetta Balzi, Head of Unit, Healthy Oceans and Seas Unit, Directorate General for Research and Innovation, European Commission at the National Maritime College of Ireland on Friday 24th November, during an event organised by the European Commission: ‘Restore our Ocean and Waters by 2030’.

Mr John Meade, school teacher who led the project was delighted that his school received the award at this key event, explaining that the school project called ‘Save our Seas’ was inspired through workshops with the Explorers outreach officer, Shazia Waheed from Old Cork Waterworks Experience.

“Shazia introduced us to the wealth of marine life in our oceans, as well as learning about many of the threats facing sea life, such as overfishing, climate change and pollution. With the focus on ‘reduce, reuse and recycle’ and with Christmas on the horizon, the children created hand-made decorations from rubbish they had collected, as well as completed projects and posters. Every class in the school took time out to engage in the Explorers healthy oceans project and have a new-found interest in protecting our oceans,” Mr. Mead further said. 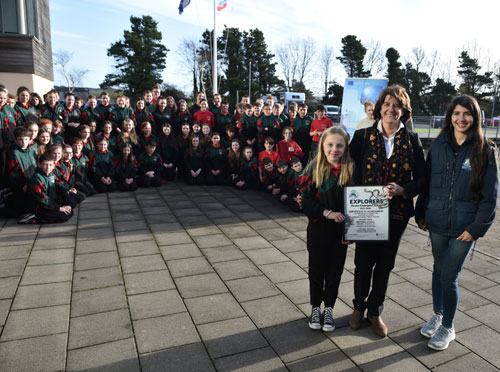 The Explorers Ocean Champion awards recognise the collaboration of children, teachers and the wider community working together to learn about the importance of the ocean and the unique maritime culture and heritage in their own area.  Up to 3,500 children and 124 teachers across 14 coastal counties created projects under the theme: creating a healthy ocean.

Shazia Waheed, Explorers outreach officer at Old Cork Waterworks, said “we were delighted that an Explorers school were included in the European Commission event, where a number of stakeholders are working towards restoring our ocean and marine biodiversity.”

“Collaborate school projects such as the Ocean Champion Awards aim to connect entire communities, build inspiration and strengthen our knowledge and understanding of what it means to be an island nation. Being recognised at this event and to have the Explorers award presented by the EU Commission Directorate-General for Research & Innovation Elisabetta Balzi have made this a very special occasion for all of us.  Her kind words and encouragement certainly provided added inspiration for the children and their love for the sea”.

This Ocean Champion project was carried out by Old Cork Waterworks. The Explorers Education Programme is fully funded by the Marine Institute, Ireland’s State agency for marine research and development, and is managed by Camden Education Trust.