Built to serve an empire and constructed during a time of rebellion, worldwide trade and emigration, Old Cork Waterworks played a key role in the prosperity of Cork and offers fascinating insights into the city’s industrial heritage.

Dating back to the 1760’s, Old Cork Waterworks stands proud on the Cork hillside, overlooking the River Lee and commands the western approaches to Cork City. 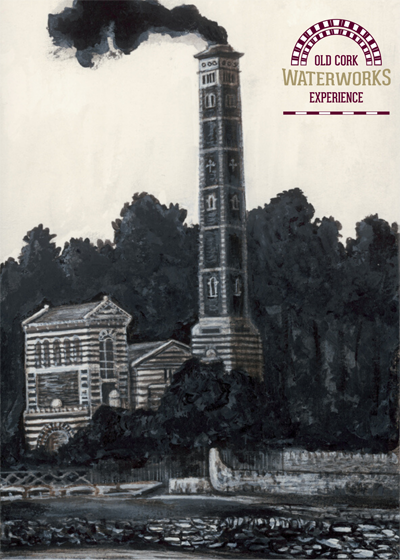 Originally the second engine house with its own boiler room and coal store, this block of buildings was completed in 1863, with the exception of the second engine room to the east which was completed c 1868. Prior to conservation works commencing none of the steam plant was still in place, although huge limestone plates on which the engines stood and racking bars for the beams of the engines show the original location of the engines.

It is interesting to note that the engine room walls were painted with a decorative stencil frieze at dado height, part of which has survived and can be seen today.This attention to detail and effort to make the buildings visually appealing despite their functional use can also be seen in the polychromatic use of local red sandstone and grey limestone to the exterior.
The former engine rooms are now used to house the exhibition while the former coal store houses the conference theatre and meeting room while the former boiler house is now the main reception area for Old Cork Waterworks Experience.

This building had not been used as anything more than a store for many years and had serious problems with the roofs and exterior stonework in particular. The roofs were re-slated and counter battened to allow for insulation above the timber sheeting. The maximum amount of existing slates were salvaged and re-used.  Although re-slated, all the original steel and timber trusses were retained. Most of the windows to the engine room survived, and these were restored on site and re-inserted. In the case of the stonework, the Cork red sandstone had de-laminated badly and a significant number of blocks had to be replaced with a similar stone. No matching stone was available locally and sandstone with a similar colour and appearance was finally brought from a quarry in Achill.