Cork and Shanghai - Innovating Together

Ann Doherty, Chief Executive of Cork City Council, delivered a presentation to an international audience at the Pujiang Innovation Forum in Shanghai at the end of October 2018 hosted by the Ministry of Science and Technology of People Republic of China and the Shanghai Municipal People’s Government. 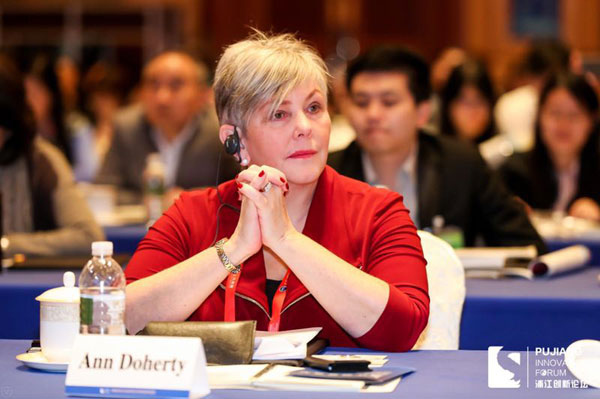 The paper called “Cork and Shanghai - Innovating together” describes the innovation ecosystem in the Cork region. However, in the spirit of collaboration and in terms of providing greater understanding to Shanghai,  the criteria used were based on the those used by the Shanghai Institute for Science of Sciences(SISS) for measuring the ecosystem in Shanghai in 2016. The project derived from ongoing collaboration with Shanghai over the last two years as part of the Twinning  of the two cities.

In July 2017 the Mayor of Shanghai Mr Ying Yong visited Cork , the first time for  a Mayor of Shanghai to do so, where he signed an extended Sister Cities’ Memorandum of Understanding with Cork city which included a clause, for the first time,  collaboration in the area of Entrepreneurship and Innovation:  to “Promote cooperation of start-up companies, incubators and science parks in innovation and entrepreneurship; support research institutions to carry out joint R&D projects”.

It was agreed with the Science and Technology Commission of Shanghai Municipality, though the SISS, as part of this collaboration that Cork would undertake a research exercise to map the innovation ecosystem in Cork using the Shanghai criteria.

The paper was  researched by Professor emeritus of UCC Deirdre Hunt and Siobhan Finn of Cork Innovates under the direction of Seamus Coghlan, Head of Economic Development. This was a very detailed exercise given the fact that there are 30 No. criteria in the analysis undertaken. It is also the first time such an exercise was undertaken and gives a very comprehensive assessment and overview of the innovation ecosystem in the Cork region.

The Chief Executive gave a 20 minute presentation which gave an overview of the ecosystem in the Cork region where Cork demonstrated to be have a strong culture of innovation particularly through the strength of its research institutions and creative and well educated talent. It also scored highly in many other criteria such as in the area of local stakeholder engagement and collaboration and also productivity. It was followed by a panel discussion with other presenters which included the OECD and the Chinese Academy of Science and Technology and other distinguished international organisations.

Following of from the conference, further engagement was undertaken with the SISS to get their feedback on the report, still a work in progress at this stage, and which will be completed in the early part of the new year following consultation with the local key stakeholders in Cork.