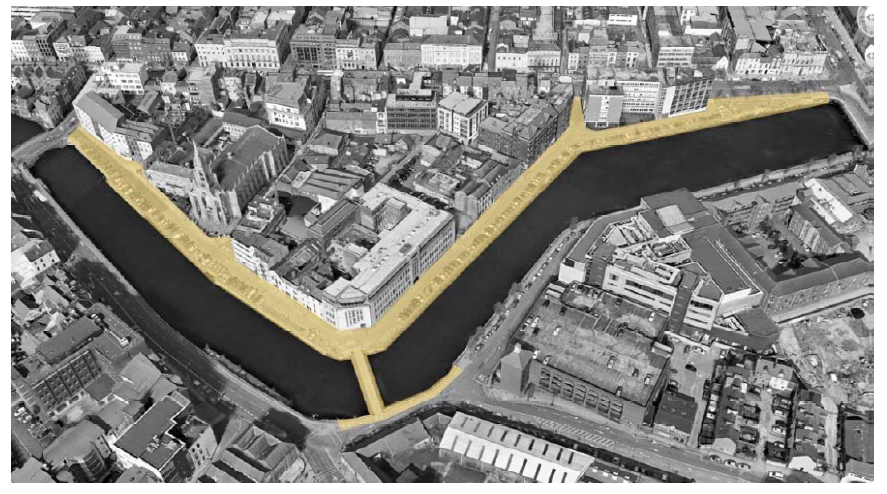 Drawing above shows the extent of the proposed works

Cork City Council’s long-held vision to revive and regenerate the Morrison’s Island quays in Cork City Centre is about to get under way. In a statement today, the City Council confirmed the detailed design is now being finalised, and it is intended to have a Works Contractor starting on site early next year.

The project will be delivered along Morrison’s Quay and Fr. Matthew Quay between Parliament Bridge and Parnell Bridge. Currently, these quays are ineffective public spaces, primarily used for car parking, and are under-utilised as a riverside amenity. As the lowest lying quays in the city centre, they are the source of regular tidal flooding that has a major impact on business and properties within the centre island.

The scheme aims to capitalise on the quay’s south facing aspect, by creating a high-quality public realm and opening up the views of the River Lee. The improved public spaces and safer and more vibrant environment will also make the area more attractive for further investment and development.

The upgraded streetscape will incorporate a wide riverside promenade, a much-improved setting for the impressive Holy Trinity Church, a plaza area at the eastern end of the South Mall and a redesigned Trinity Bridge crossing to Union Quay. As part of the project, changes will also be made to traffic movements, car parking will be reduced, and additional bicycle parking will be provided.

In addition to the public realm investment, other critical aspects of the project are the construction of flood defences, changes to the surface water drainage system and remedial works to the existing quay walls. These quays are frequently inundated by tidal flooding, and the defence works will bring much needed reassurance to City Centre businesses. In addition, the historic cut limestone quay walls will be refurbished to ensure their long-term integrity by repairing, cleaning and re-pointing in-situ.

The flood defence measures are urgently needed to alleviate tidal flooding around Morrison’s Island and the South Mall and adjoining streets which has frequently caused extensive damage to people’s businesses and properties in that area of the city centre.

The project will be co-funded by the Office of Public Works (OPW), which is committed to investing in flood defence works and the refurbishment of the quays.

In An Bord Pleanála Inspector’s Report, the following conclusion regarding the benefits of the scheme was reached “The benefits of the scheme are considered to be significant in terms of reducing the severity and hardship experienced by residents and businesses as a result of tidal flooding in the area. It will also provide for necessary remedial works to the architecturally significant quay walls and provide for a much-improved public realm, which is likely to benefit the recreational and commercial amenities of the waterside area. I am satisfied that the proposed development is justified and supported by the policy framework for the area, particularly the policies and objectives of the Cork City Development Plan”

The Inspector’s report also stated that the “...the quaysides are dominated by tarmac-surfaced car parking with poor quality walls and railings along the water’s edge and low-quality ground floor uses with a considerable degree of vacancy and dereliction” and the project “Will facilitateregeneration ofarea, better use of riverside amenity, more sustainable transport patterns and greater certainty regarding flood risk. The impact on social infrastructure would therefore be positive.”

The Lord Mayor of Cork, Cllr. Joe Kavanagh said of the decision:

"I very much welcome the progression of this project which is transformational for the area and will provide a much-needed new public space in the city centre.  It will be a source of significant relief to residents and business on the city island who little over a decade ago, experienced €130 million of flood damage and every year since have lived in the very real fear of this happening once more. For business, who are experiencing challenges like never before, a similar flooding event in the coming months or years is unimaginable”.

“I think that the decision of An Bord Pleanála is a strong vindication of the rationale in bringing forward this public realm project and is also an endorsement of the design and quality of the scheme. This is a transformational scheme for the city centre and for riverside amenity and I believe it will be warmly welcomed by Cork people and visitors alike.”