Update on cycle infrastructure coming on stream in next month 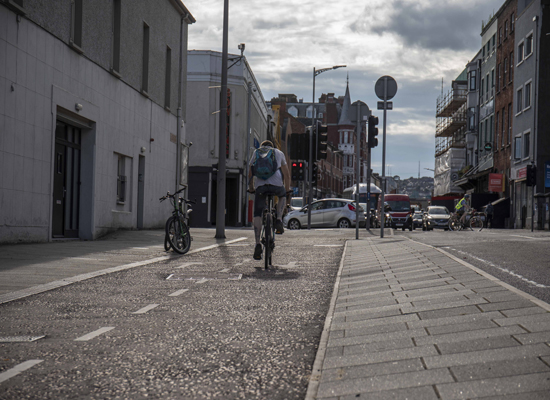 As part of Cork City Council’s Re-Imagining Cork City’ project, up to €2 million is being invested in the city’s cycling infrastructure, with support from the National Transport Authority (NTA).

More than 43 new bicycle racks are being installed across the city with new indoor racks now  in place at North Main Street Shopping Centre and sponsored racks at St Patrick’s Street, Union Quay, Ballincollig Regional Park, Blackrock Castle car park, Grand Parade and Parnell Place. In recent days, racks were also installed at Coburg St, Mac Curtain St, North Main St, Daunt Square, St Patrick’s Street and Parnell Place. In the coming days, they will also be installed at either end of Mary Elmes Bridge and at Oliver Plunkett Street, Pembroke Street and on Grand Parade. Approximately 25-30 more will be installed outside the city centre by the end of the year. These new racks will enable the safe parking of approximately 500 bikes.

Work started in recent days on 2.9 km on ‘interim’ cycle lanes at Centre Park Road and Monahan Road. The Monahan Rd lane is for inbound cycling towards the city centre while the Centre Park Road lane is outbound towards Blackrock. Both lanes will be protected with wands. The surface of these lanes is being renewed and new bus stop facilities will also be put in place on the route. Repairs are also being made to sections of the wider road surface.

Work on Horgan’s Quay cycle lane is well advanced and will be operational before Christmas. Work on Donovan’s Road is scheduled to start within the next 2-3 weeks. The proposed two-way cycle lanes on South Mall will be going to tender in the coming days with construction to begin afterwards.

The installation of increased cycling protection on the city’s cycle lanes is due to begin during the Hallowe’en Mid Term break – with an initial focus on the areas around schools. Up to 4.65 kilometres of Orca wands will be installed by contractors in the city centre and suburbs including Alfred Street, South Main Street, Washington Street, near UCC gates on Washington Road, Rossa Avenue, in Mahon Point, Ballincollig, Mulgrave Street.

Next month, the €1.5 million upgrade and re-lining of 6 km of cycle lane surfaces as well as specific bus lane sections is due to begin with new resin being placed on surfaces. These works will take place overnight. Resurfacing will take place in the city centre, Gillabbey St, Proby’s Quay, Rossa Ave, Ballincollig, Kinsale Road, Mahon Link and Douglas.