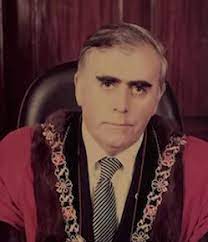 “Toddy O’Sullivan was a stalwart of the Labour Party in Cork and widely respected across all political parties. Toddy your City thanks you and remembers“, he said.

A member of the Post Office Workers Union (now CWU), his base was on Barrack Street in the city centre. He had attended the nearby Greenmount National School.

Toddy was elected in the Cork South West electoral area of Cork Corporation in 1974 with 585 first preferences, taking the second seat.

He was elected again in the 1979 local elections, more than doubling his previous vote to 1,199 first preferences and becoming the first Councillor returned for the ward.

Alderman Toddy O’Sullivan first stood for the Dáil in the 1979 Cork City bye-election after the death of Labour TD Patrick Kerrigan, more than doubling the Labour vote from 10.2% to 22.6% but not taking a seat.

He went on to serve as a very successful Lord Mayor of Cork in 1980 and was elected to the Dáil a year later when he topped the poll in Cork North Central with a young Fergus Finlay as his public relations officer.

Finlay later described him as ‘a man who radiated decency and integrity and who made an outstanding success of his term as Lord Mayor’.

Toddy O’Sullivan served 16 years as a TD and was re-elected 5 times. He moved to Cork South Central in 1987 and was elected Chair of the Parliamentary Party in 1989.