Temporary diversions in place on a section of Blackrock Greenway 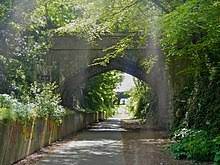 Works to resurface, widen and install public lighting on the Blackrock Greenway mean that a section of the amenity between Atlantic Pond and Blackrock Station, will be temporarily closed from May 10.

Pedestrians and cyclists will be asked to observe the following diversions:

These upgrade works are expected to continue for up to 10 weeks.

The Blackrock-Mahon Greenway Improvement Scheme has been designed to:

(2) encourage and prioritise its ongoing development as a green living corridor with significant health and well-being benefits.