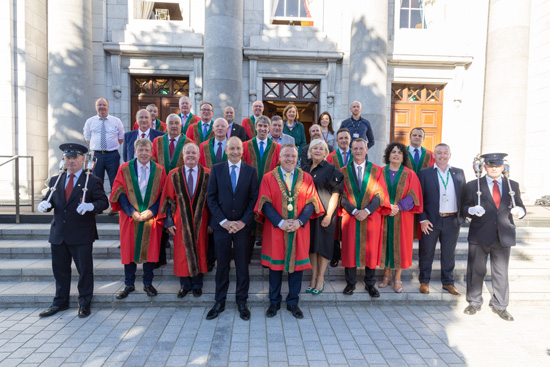 The Taoiseach is the first former Lord Mayor of Cork to become the head of the Government of Ireland, having served as Lord Mayor in 1992 at the age of 32.

The Lord Mayor of Cork, Cllr. Colm Kelleher said: “I’m truly proud to welcome the Taoiseach back to City Hall, as he is ‘one of our own’- a Turners Cross native, a former Lord Mayor of Cork and former Cork City Councillor. He is of this city and for this city.”

Taoiseach Micheál Martin said: “It is a pleasure to come back to the Council Chamber in City Hall to address this meeting of Cork City Council, 30 years after I chaired the meetings here as Lord Mayor and especially at this time of unprecedented and exciting change for Cork City.  There is massive momentum behind Cork, backed up by the energy and appetite to make it truly a world class city.  The work that Cork City Council does is crucial to realising the ambitions the government has for Cork, enshrined in the National Planning Framework and the National Development Plan.  It’s important to acknowledge the pivotal role that local government plays in the life of this nation.”

Chief Executive of Cork City Council Ann Doherty thanked the Taoiseach, saying: “I’d like to thank you and your Government for your ongoing support for this City and its vision to grow as a city of sustainable urban growth. We intend to build on that momentum in the coming years by continuing to work and collaborate with our partners in Government, the private and public sector.”

The Lord Mayor presented the Taoiseach with a copy of the then Cork Corporation’s 1992/93 Yearbook and a set of Cork City Council silver cufflinks.  Mrs. Martin was presented with a bouquet of flowers by the Deputy Lord Mayor Mary Rose Desmond, and a silver brooch by Chief Executive Ann Doherty.