The Cork Docklands to City Centre Road Network Scheme is key to unlocking the Cork Docklands which has the potential to be the largest city regeneration programme in Europe and provide up to 15,000 homes and up to 29,000 jobs. It has been a long-standing objective of the City Council which long pre-dated the Lower Lee FRS. It is a multifaceted project which includes improved transportation corridors for public transport, cyclists and walkers as well as introducing new river side amenities such as a boardwalk and pontoon along a quay front which is currently not open to the public. This will allow increased access for future river amenity users, pedestrians, cyclists etc. 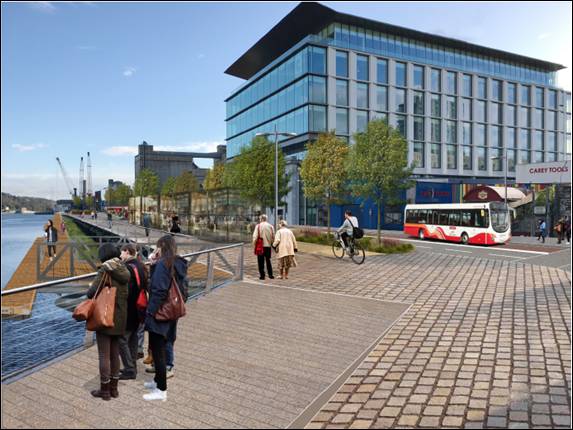 Like all projects, Cork City Council and its design team are obliged to ensure that the proposals are compatible with the planning and flood risk management guidelines, which is part of the Planning Act. In the case of the Docklands project, this has been achieved by clever re-grading of the ground levels such that the river side edge, as proposed, is sufficiently high to avoid the need for a flood defence wall. This allows for an open aspect to be provided to the river in what is an extremely attractive architecturally designed scheme with the proposed river edge protection consisting of a six inch high stub wall with open tension wire railing. Note this design solution is confined to Albert Quay East which is currently operating as a working wharf. Albert Quay West and Terence MacSwiney Quay remain unchanged.

The ‘Docklands to City Centre Road Network Scheme’ is an integrated project which aims to provide sustainable transport infrastructure (bus lanes, cycle lanes and quality pedestrian space) while also improving the public realm for residents and workers. The scheme is future proofed and compatible with the flood risk management guidelines, as required. There won’t be a situation where a high quality transportation scheme is delivered now and would have to be significantly altered in the future to incorporate a flood defence scheme. This is simply prudent planning in the delivery of public services and represents value for the tax payer. Further, the development of the ‘Docklands to City Centre Road Network Scheme’ in this manner represents the joined up thinking and ‘talking to each other’ that the public are entitled to expect when public bodies (Cork City Council and the OPW in this case) are working in proximity as in a case like this.

The Cork Docklands to City Centre Route Improvement Scheme is currently the subject of public consultation with detailed plans, sections and photomontages readily available, allowing the public full visibility of the proposals.