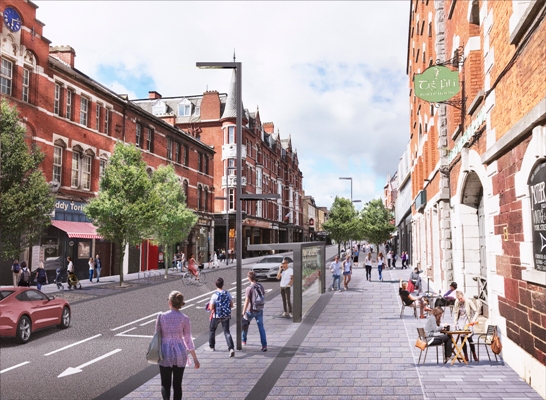 Cork City Council, in conjunction with the National Transport Authority,  has unveiled details of the next phase of the transition to a more sustainable transport system in the city.

The proposed plans are available to view in the virtual public consultation room on https://consult.corkcity.ie

Under the scheme, the public realm will be improved and new traffic arrangements put in place on MacCurtain Street and adjoining streets so as to make the area more accommodating for shoppers, pedestrians and cyclists. The new arrangements will be complemented by the recently opened Mary Elmes pedestrian/cycle bridge. The other streets covered by the scheme include Leitrim St, Coburg St, Bridge St, St Patricks Quay, Brian Boru St, Merchants Quay, Andersons Quay as well as Cathedral Walk and part of Mulgrave Rd.

The plan will have a transformational effect on MacCurtain Street itself creating a more relaxed atmosphere with new and wider pavements and the proposals have been warmly welcomed by representatives of local businesses.

Gerry O’Beirne, Director of Infrastructure Development of Cork City Council, said that the proposals which now go out to formal public consultation under the Part 8 Planning process were essential for the improvement of public transport in the city centre, more efficient management of traffic and greater sustainability.

“The National Planning Framework 2040 envisages that Cork will become the fastest growing city region in Ireland with a projected 50% to 60% increase in its population up to Year 2040. This growth is very positive but it means that new approaches must be adopted for the management of traffic in Cork. The diversion of through traffic from the city centre, the creation of priority bus corridors and the facilitation of walking and cycling options are imperatives if the city is to function well and prosper,” he said. 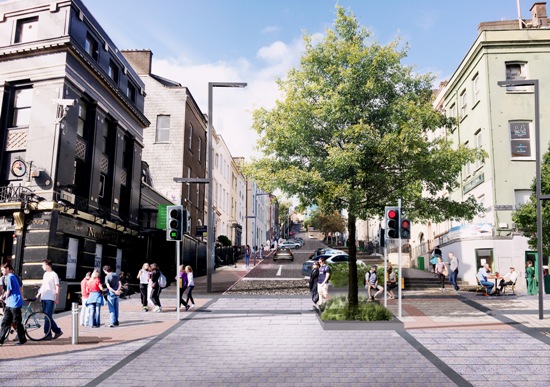 The scheme will deliver extensive improvements for pedestrians. The reorganisation of traffic flows will significantly reduce traffic volumes on the MacCurtain St and wider footpaths, reduced speed and an upgraded public realm will help create a more attractive environment for all. In making these changes MacCurtain St will transition from traffic dominated street  to a pleasant visitor destination. Junction operation, pedestrian crossings and public lighting will all be upgraded across the entire scheme area.

The establishment of safer walking and cycling routes for school students is a particular priority given the concentration of schools within a relatively small area of the city centre. Over reliance on cars to transport students to schools is a significant contributor to traffic congestion and the scheme provides for viable alternatives to the practice. 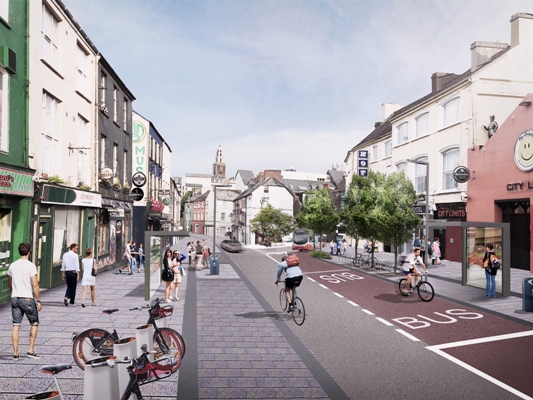 Cycling facilities are to be improved considerably under the scheme with:

These facilities will provide better connections to existing cycleways at Popes Quay and Penrose Quay as well as Mary Elmes Bridge and the City centre. The proposed new segregated two-way cycle routes will complement the improvements delivered under previous projects and provide the connectivity needed to link to other planned cycling infrastructure including Horgan’s Quay, South Mall, Docklands and further afield. The existing public bike stations will be retained but will be realigned to better suit the new street layout. Additional bike parking will be provided at key locations throughout the area. 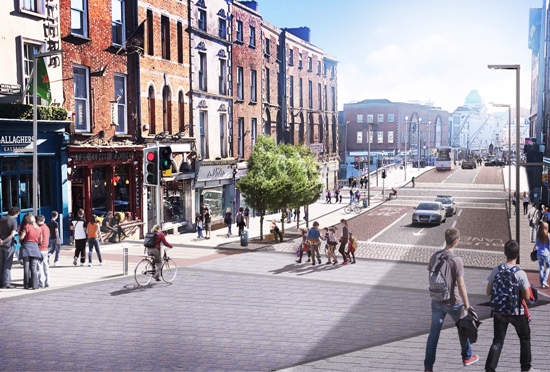 The improved public transport corridors set out in the scheme will reduce journey times and enhance bus service reliability. New bus lanes are to be provided along a number of streets including Leitrim St, Cathedral Walk, Coburg St Devonshire St Bridge Street and St Patricks Bridge. Reduced traffic volumes will improve public transport movement along Mac Curtain St. There will also be a reorganisation of coach parking which under current arrangements experiences traffic congestion. The bus prioritisation measures and related general traffic changes will enable re-routing of some bus services onto MacCurtain Street and Coburg Street and improve services between the city centre and suburbs as well as the commuter towns to the north and east of the city. The scheme has been designed to be fully compatible with the forthcoming Cork Bus Connects Programme as set out in the Cork Metropolitan Area Transport Strategy (CMATS).

The MacCurtain Street Scheme is the latest phase of works to be progressed as part of the City Centre Movement Strategy (CCMS). To date, this strategy has supported the delivery of significant changes to the traffic flow, improved cycle facilities and public realm upgrades at and around Parnell Place, Popes Quay, Grenville Place, Prospect Row, Grattan St, St Patrick St, Lower Glanmire Rd, Penrose Quay and Mary Elmes Bridge.