Lord Mayor of Cork Cllr. Mick Finn hosted a ceremony in City Hall on 9 May where the late Irish Republican Joe Murphy was posthumously awarded a Service (1917-1921) Medal in recognition of his contribution to the Irish struggle for independence. The Lord Mayor will presented the medal to Mr. Murphy’s nephew Henry Delaney on behalf of the Minister with responsibility for Defence, Mr. Paul Kehoe, T.D.

Joe Murphy, who lived on Pouladuff Road, joined the Irish Volunteers as a young man in 1917.  Following his arrest by British forces in July 1920, he was imprisoned in Cork Gaol and shortly thereafter commenced hunger strike in conjunction with a number of other Irish Republican prisoners, including then Lord Mayor of Cork, Terence MacSwiney. Murphy died after 76 days without food on October 25th 1920, at the age of 25.

Speaking ahead of the ceremony, Lord Mayor of Cork, Cllr. Mick Finn said: “Young Joe Murphy is almost a forgotten local hero of the war for Irish freedom and independence.  Many of us in the Ballyphehane area are constantly reminded of him as his name is forever etched on the streetscape of the city, but his death on hunger strike only hours after the passing of Lord Mayor Terence MacSwiney was largely overshadowed by the death of Cork’s First Citizen. That he is finally being rewarded with an official service medal of honour is just and right and credit to his family for pursuing it for almost a century. It means his memory and place in history will live on even more.”

The Minister with responsibility for Defence, Mr Paul Kehoe, TD said:  “I am pleased to be able to posthumously award the Service (1917 – 1921) Medal with Bar to the late Joe Murphy in respect of his service during the War of Independence, some 99 years after his death on 25th October 1920. I would like to thank the Lord Mayor, Councillor Mick Finn for presenting this medal on my behalf and for hosting a special event for the members of the extended Murphy family, in particular Mr Henry Delaney (Nephew of Joe Murphy) and his daughter Shirley Kelleher.”

Mr. Murphy’s grand-niece Shirley Kelleher expressed her pride in her granduncle’s achievements, saying: “I am so proud, delighted that after all these years that Joe Murphy, a local hero, is now being recognised on a national scale.  He was an ordinary man who made an extraordinary sacrifice that we continue to honour and celebrate.”

The medal being presented is awarded on the basis of information held on the late Joe Murphy in the Military Service Pensions Collection, which is a joint Department of Defence and Defence Forces contribution to the ‘Decade of Centenaries’.

The Project is mandated to digitise and release the files and records of the Department of Defence dealing with the service of qualifying members of the Irish Volunteers, the Irish Citizen Army, The Hibernian Rifles, Cumann na mBan, Na Fianna Éireann and the Irish Republican Army in relation to April 1916 to September 1923.  Since the first public release of files in 2014, a total of over 83,000 files aggregating to more than 850,000 individual pages have been released.  The files relating to the late Joe Murphy are available online in the collection on the Military Archives website. 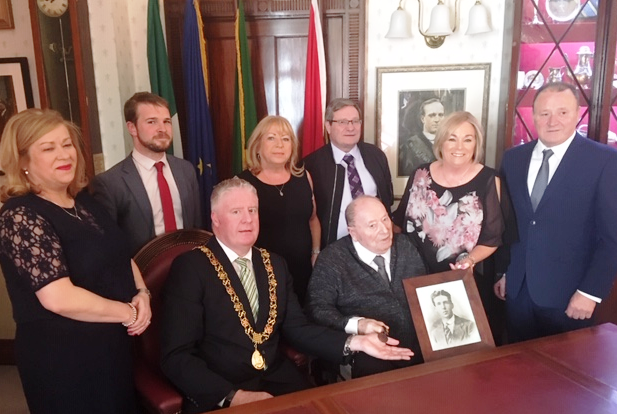