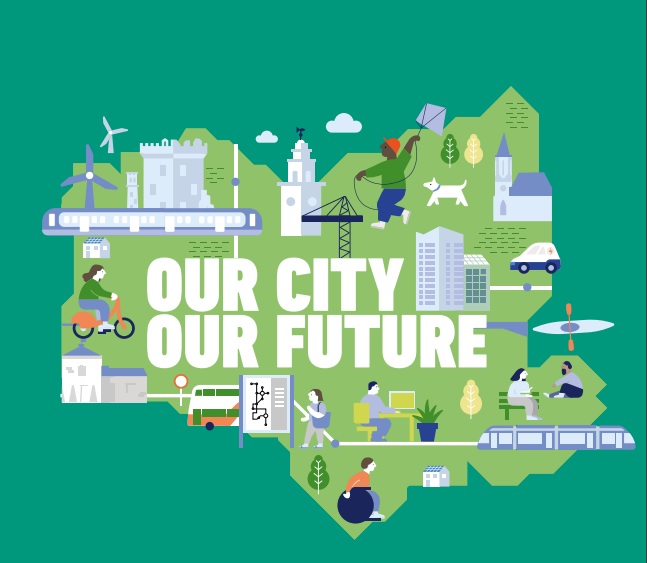 The draft Cork City Development Plan, which is being published today, provides an overarching framework to help shape the transformation of the City over the next six years by supporting the creation of 20,000 homes and 31,000 jobs.

‘Our City, Our Future’ provides a transformative blueprint for Cork as the city embarks upon an exciting phase of growth and change – with sustainability, quality of life, social inclusion, and climate resilience at the plan’s core.

Eight weeks of public consultation on the plan also commences today. Cork City Council is calling on residents, workers, the business sector, community, sporting and voluntary groups in the city and beyond to have their say on the 2022-2028 plan.

Lord Mayor of Cork, Cllr Colm Kelleher said: “This is the first of three critically important city developments plans for Cork. It is the first of three such plans that will provide a pathway to achieving a 50% increase in population by 2040 so that Cork grows as a city of international scale”.

“This Plan aims to ensure that as our population increases substantially, we become an even better place to live. It is centred around supporting housing, economic development, public realm renewal, transport, more amenity spaces and community services in existing built-up areas, using the internationally-recognised 15-minute city model”.

Cork City Council CE, Ann Doherty said: “This Plan is significant in many ways; not least it is the first local policy-based expression of the ambition for Cork contained in ‘Project Ireland 2040’ and the National Planning Framework. The Plan follows widespread listening and engagement with stakeholders in the first round of public consultation. The Plan’s rationale is further informed by a suite of evidence-based studies on the various opportunities and challenges facing the city”.

“This draft plan is being published at a time of unprecedented opportunity. Cork City has up to €1.8 billion in ringfenced central government funding and up to €3.5billion earmarked for the city over 20 years as part of the Cork Metropolitan Area Transport Strategy (CMATS). There is a visible confidence in our city as evidenced by planned landmark projects such as the €46 million Grand Parade Quarter, which is going through public consultation at present, and the Cork City Docklands, a scheme of international significance that, as Ireland’s largest regeneration project has already received €355 million from the Government’s Urban Regeneration and Development Fund (URDF),” Ms Doherty said.

The Lord Mayor of Cork City, Councillor Colm Kelleher encouraged members of the public, community groups, representative organisations to make a submission to the draft plan before the closing date of 4th October.

The draft plan can be viewed at www.corkcitydevelopmentplan.ie and the public can have their say on the Plan at https://consult.corkcity.ie/