Cork selected by European Commission to lead on climate action 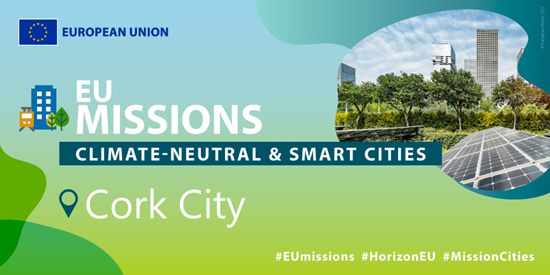 The European Commission today announced that Cork is to become one of Europe’s first climate neutral cities. Cork, along with Dublin, was selected as one of 100 cities who will lead the way on climate action and smart cities across Europe.

Working with partners in the public and private sector and with local residents, Cork City Council will lead the transition to becoming a climate neutral and smart city by 2030 as part of the EU Cities Mission.

President of the European Commission, Ursula von der Leyen said: “The green transition is making its way all over Europe right now. But there's always a need for trailblazers, who set themselves even higher goals. These cities are showing us the way to a healthier future. We will support them on this. Let's begin the work today.”

The Cities Mission will receive €360 million of Horizon Europe funding over the period 2022-23 as they begin the journey towards climate neutrality. Cork City Council’s bid was supported by Government through the Department of An Taoiseach who said “this initiative will allow for participating cities to be at the forefront of demonstrating how local authorities, relevant public bodies, business, third level institutions, civil society and citizens can work together in practical ways to tackle emissions”.

Lord Mayor of Cork, Cllr Colm Kelleher said: “Cork City is positioned to be the fastest growing city in the country. Being selected today as one of the first 100 cities to lead on climate neutrality is a fantastic endorsement of Cork City Council’s vision to achieve this growth sustainably, without sacrificing quality of life. The prioritisation of climate action will ensure that Cork can play a local role in addressing the most pressing global challenge of our time”.

“We all need to join together to achieve this goal whether you are a resident, visitor to the city, in business or seeking to invest in Cork: being climate neutral is about lower energy bills, less congestion, more sustainable transport options and living in communities where it’s easier to be healthy,” he added.

Cork’s bid was evaluated across six categories including capacity, collaboration, ambition, integrated holistic approach, preparedness and digitisation. According to the European Commission, the Mission wants to bring cities of different sizes within its scope. Benefits of the designation include unlocking funding and finance opportunities, tailor made advice and support through a national co-ordination network.

Cork City Council Chief Executive, Ann Doherty said: “We are delighted to have been selected by the European Commission as one of 100 ‘Mission Cities’ who will play a leading role, nationally and locally, in achieving the goals and objectives of the Government’s Climate Action Plan and the European Green Deal. This new status places us at the heart of the urban sustainability agenda in Europe. It will also mean a front loading of planned investment in the city so that we can accelerate our vision to meet the ambitious growth targets set for us in the National Planning Framework, Ireland 2040 while leading on sustainability and climate action”.

“This new designation by Europe positions us as a much more attractive city to live, work, study, do business and invest in. While we have made considerable progress in the spheres of climate action and smart cities , I acknowledge that when compared with some of our EU counterparts we have possibly further to travel to achieve our ambition,” she said.

In making the application, the challenge ahead was not downplayed as we are coming from a comparatively low base but it is an acknowledgement of our ambition, achievements to date and commitment to growing Cork as a sustainable compact liveable city. Our initial focus will be on coalition building across all sectors and communities as the path to climate neutrality will require extensive collaboration and engagement with our local, national and international partners,” she added.

Cork City Council is keen to take a leading civic role in climate action.  In doing so, we can improve quality of life, by reducing emissions, providing healthy living options, and continuing to build a sense of belonging with our increasingly diverse community.  This can be a win-win for residents of Cork, support the accelerated delivery of infrastructure and improve the attractiveness of Cork as a place to visit and invest in.  We can only achieve this ambition if we work together with communities, Government Departments and State Agencies to achieve our ambitions for the city.

Earlier this year, the European Commission sought cities to join the Horizon Europe Mission on Climate-Neutral and Smart Cities.

The objectives of the mission are to achieve 100 climate-neutral and smart European cities by 2030 and to ensure these cities act as testbeds for innovation in climate action enabling all European cities to follow suit by 2050.