Cork has been hailed the number two small city in Europe for economic potential, according to the Financial Times FDI European Cities and Regions of Future 2020/2021 league.

The city’s dominance in terms of FDI strategy was also singled out with the city making it to the top 10 ‘Small European Cities of the Future’ league for its FDI strategy along with Reykjavik in Iceland, Kaunas in Lithuania and Debrecen in Hungary.  It ranks eighth ahead of Nicosia in Cyprus and Reading in the UK.

FDi Magazine’s European Cities and Regions of the Future presents a league table of the most attractive locations in Europe for inward investment.  Up to 505 locations were judged in total including 319 cities and 148 regions with Cork classed as a small city based on population. Small cities are cities with an immediate city population of 100,000-350,000.

Responding to the news Lord Mayor of Cork Cllr John Sheehan said: “We can see it all around us. Cork is going through a period of unprecedented economic development and investment with up to €1 billion of office, hotel and apartment developments underway. Cork city is the European base of global leaders like Apple and home to life sciences & ICT clusters and this confidence is our future is clear in the sustained growth evident at Cork airport and with the large numbers of people from overseas choosing Cork as a place to live and work ”.

Cork City Council Chief Executive, Ann Doherty said: “We are delighted to see Cork being ranked so highly as a location for investment. Cork City Council has worked hard with Cork County Council, IDA Ireland, UCC, CIT and Enterprise Ireland to make Cork a global investment capital where businesses are enabled to grow.  Cork is home to more than 169 FDI employers employing almost 39,000 people and eight of the world’s 10 leading pharmaceutical companies have a presence in the Cork metropolitan area”. 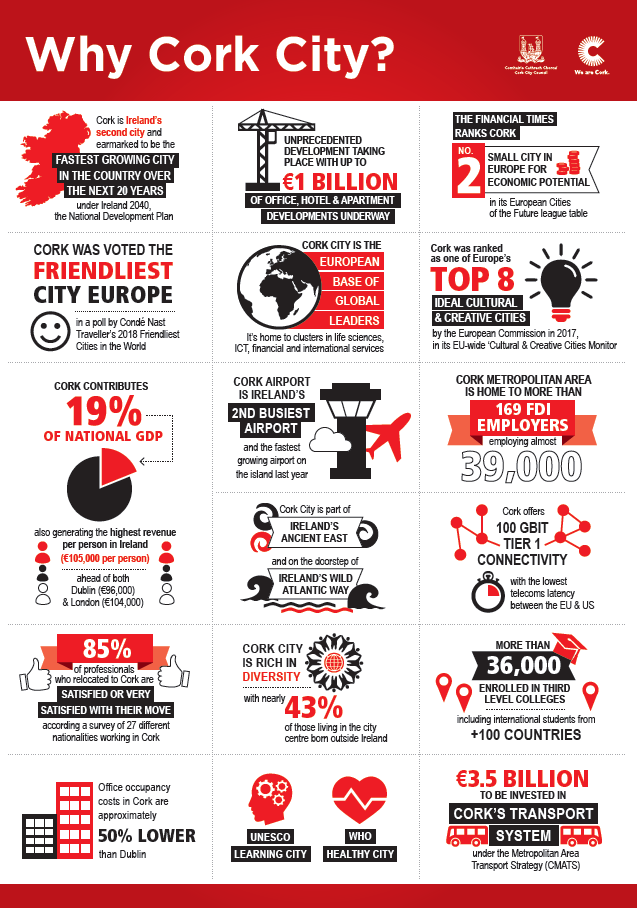