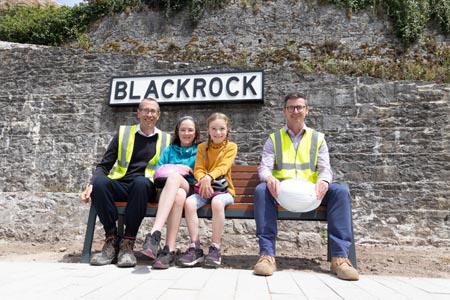 The Cork City to Passage West Greenway re-opens to the public today (Friday July 15) after major works aimed at providing a higher quality route for recreational and commuting pedestrians and cyclists. The works are being carried out for Cork City Council by Ward and Burke Construction and funded by the National Transport Authority.

The public can enjoy a wider, safer greenway, new access ramps, over 2,000 new trees, CCTV and environmentally sensitive public lighting on the much-loved amenity which traces the route of the 19th century Cork, Blackrock and Passage Railway line.

Conservation works are ongoing at Blackrock Railway Station and the many bridges along the route. These bridges represent some of the finest examples of stone-cut bridges in the State. The Blackrock Road railway footbridge has been re-installed using the existing historic abutments, access ramps and disused railway platforms.

The culvert which runs along the greenway, under Skehard Road, has also been transformed by local street artists working alongside artists from Spain and Brazil. Coloured lighting has also been installed on the underpass.

The Cork City to Passage West Greenway begins a stone’s throw from Cork City Docklands – the largest regeneration site in the country - and from phase one of the recently-opened Marina Park. It continues alongside the Marina, which was pedestrianised two years ago. Cork City Council is currently asking the public to have their say on its plans to re-purpose approximately 1.8km of the existing Marina Promenade to deliver a combined footpath-cycle path and improved public spaces.

Lord Mayor of Cork, Cllr Deirdre Forde said: “There will be great excitement to see ‘The Line’ re-opened and to enjoy an even better and safer walking, running and cycling route for residents and visitors to the city. Native trees, shrubs and wildflowers have also been planted along the route and bat boxes installed to enhance its biodiversity in the years ahead”.

Cork City Council is continuing works on the new access ramps at locations such as the Marina and Blackrock Station and further semi-mature tree planting is planned. It is expected that Cork City Council will shortly submit a planning application to upgrade the section of the greenway from Mahon to Passage West.