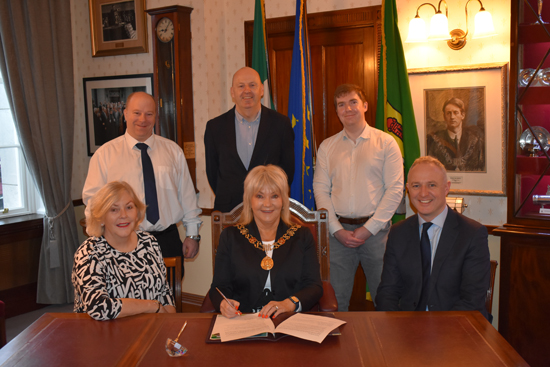 Cork City Council has signed the Charter of the European Union (EU) Missions for Adaptation to Climate Change as part of its continuing commitment to climate action and the United Nation’s sustainable development goals.

Later this year, Cork City Council will prepare a Climate Action Plan for the City.  This will be developed though a coalition approach with local, regional, national and international stakeholders and partners and will culminate in a contract between the City, the Government and the EU that is underpinned by a Climate Action Investment Plan.Further climate action engagement and consultation will be carried out in the coming months. This will include a household survey, a risk assessment study and a series of Cork Climate Conversations.  These conversations be held with stakeholders from the public sector, business and community.  The Council will also use innovative ways to engage with schools and younger generations to ensure their voice is heard in the development of the plan.

Cork City Council is continuing to rollout key initiatives that address climate change and improve quality of life for residents and visitors.  These include significant investment in active travel, continuing to retrofit its housing stock, develop its parks, and blue and green amenities in a manner that supports biodiversity, and the objectives of COP 15.

Speaking at the signing of the Charter, Lord Mayor Cllr Deirdre Forde said: “This is another important step in our climate action journey. Over recent years, Cork City Council has made significant progress in relation to Climate Action.  We are the only local authority in Ireland with a dedicated Climate Action Committee of Council, chaired by Councillor Oliver Moran, and the work of this committee is supported by a Climate Action Team, chaired by the Chief Executive.  Importantly, the first Action Plan adopted by this Council in 2019 was the Climate Change Adaptation Plan, which contained 66 actions, the majority of which are underway”.

Cork City Council Chief Executive Ann Doherty said: “The Council’s commitment to Climate Action was endorsed at international level when the European Union selected Cork City to participate in the 100 Climate-neutral and Smart Cities Mission last year. The Adaptation to Climate Change Mission will complement this and provide us with the opportunity to network, share experiences with and learn from other regions and communities in Europe”.