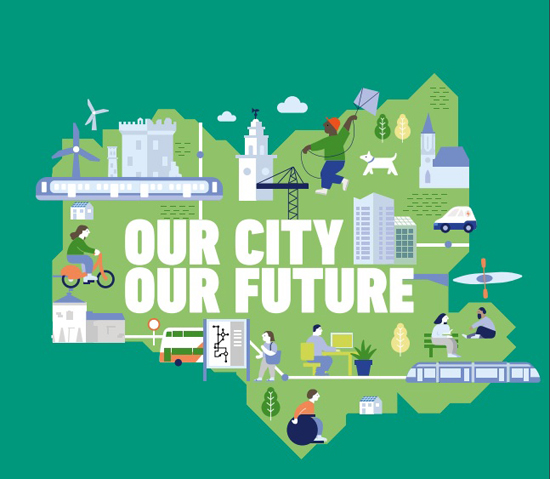 Cork City Council has launched a consultation process for the preparation of the vitally important City Development Plan (CDP) 2022-2028 which will provide the framework for how the city will grow and develop in the coming years.

This CDP comes at an extraordinary time for Cork.  Last year, the city’s population grew to 210,000 following an extension of the city boundary which positioned Cork as a city of scale. Furthermore, it has been set government targets to grow by 50% over the next 20 years so that it can provide a counterbalance to Dublin.

As part of this initial consultation, Cork City Council is seeking the views of the public on how to best develop Cork City to meet the changing needs of our society, environment and economy while realising the ambitions set for our city.

The public is invited to read the ‘Our City – Our Future’ issues paper which is available at www.corkcitydevelopmentplan.ie , at Cork City libraries and by appointment at the Planning Counter at Cork City Hall. A submission on the plan can be made as part of this initial public consultation from today, June 26 until August 21 2020.

The Lord Mayor of Cork, Cllr. Joe Kavanagh said: “We want to hear your views on how Cork City should develop. Cork has all the vital components to attract more residents, workers, business and investment to the city. Higher population helps to attract public and private sector investment, particularly in areas of health, transport, education and housing.  Job creation will be a key objective of the plan but an equally important objective is to ensure that our city’s transformation will deliver an enhanced quality of life for all of us and will be built upon respect for our city’s rich heritage”.

Cork City Council will engage in an extensive public consultation process to gather the views of people around the City Development Plan. This will include webinars, community engagement, surveys, a photographic competition for young people and we intend to hold a public meeting in August, whilst ensuring public health guidelines are upheld.

A Development Plan is a public document used to guide development in your city. It is renewed every six years and sets out how land is used in your neighbourhood, for example; housing, employment, infrastructure, open / green space and retail.

It addresses changes in the economy, government guidelines and policies, environment, climate change and the ongoing loss of biodiversity and how your city will respond to these challenges.

It also states the city’s objectives and policies which will guide proposed development and planning.

So what is happening now?

We welcome your thoughts and ideas on how best to grow and develop Cork City to meet the changing needs of our society, environment and economy. Therefore, a preliminary public consultation is taking place from 26 June 2020 to 21 August 2020.

We’ve produced a document ‘Our City – Our Future’ which sets out some key issues that will influence the future of Cork City.

The public is invited to read ‘Our City – Our Future’ and make known their opinions (in what is known as a submission). The focus at this initial stage is on strategic issues and people cannot make submissions on land zonings for individual sites.

How can I make a submission?

Submissions can be made via:

During the current eight week preliminary public consultation stage, people are invited to offer their suggestions and ideas on how the city should develop and respond to the Issues Paper ‘Our City, Our Future’.

The Cork City Council Chief Executive (CE) will then submit a report summarising the Pre-Plan consultation submissions to Cork City Councillors who provide strategic direction on what they want the Draft Plan to contain in line with proper planning and sustainable development.  A Draft City Development Plan is then prepared and made available for another 10 weeks public consultation (in which further submissions can be made).

After this second round of consultation, the CE submits a second report summarising the Draft Plan consultation submissions to the full Council and her recommendations on the key issues arising.

Then the City Councillors decide on suggested amendments to Draft Plan and a third public consultation on the City Development Plan Amendments takes place over four weeks (in which final submissions can be made but solely on the proposed amendments).

The new City Development comes into effect six weeks after it is made.