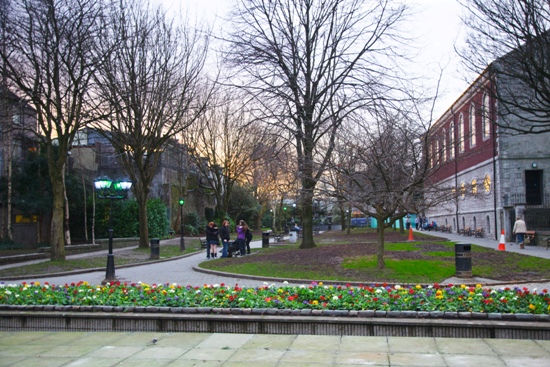 The Royal Institute of Architects has launched an international architectural and landscape design competition, in conjunction with Cork City Council, for the redevelopment of Bishop Lucey Park in Cork city centre.

The redevelopment of Bishop Lucey Park is a key part of Cork City Council’s City Centre Strategy and integral to improving the quality of amenities in a city that is projected to grow to 300,000 in the next 20 years - with an increasing number of young families expected to live in the city centre. The Lord Mayor, Cllr John Sheehan said: "There will be great public interest in Cork to see how this competition could transform this public space in the heart of the city. It's another project that will ensure Cork becomes a more liveable city for young and old".

According to the competition's vision statement, the competition “seeks to increase the functionality and use of Bishop Lucey Park as the main soft space on the city centre island...It [the park] serves the people working within the city, and an increasing number of tourists, as well as the development of the adjacent multi-use site on the former Beamish & Crawford Site”.

Designers are being asked to consider a number of objectives including: the design of a park with “something to offer for all ages”, a design that ‘opens up’ the park to the city, the park’s role as a central “soft space” in the city centre and the medieval nature of the site “by emphasising the existing town walls within the site”.

Entry is open to any architect-led team from around the world and offers a first prize of €15,000,with an opportunity to develop the scheme to completion, second prize is €10,000 and third prize is €5,000.

This 150m x 50m Bishop Lucey Park site is located between South Main Street and the Grand Parade in the medieval quarter of Cork city.