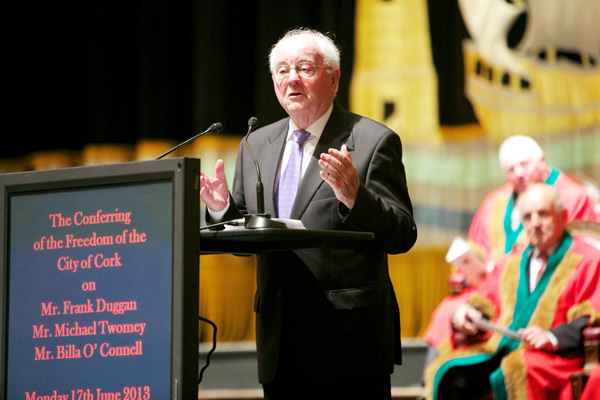 Mr. O'Connell was granted the Freedom of Cork City in 2013, along with fellow Cork entertainment giants Frank Duggan and Michael Twomey (a.k.a. "Cha and Miah").

Lord Mayor of Cork, Cllr. Colm Kelleher paid tribute to Mr. O’Connell, saying:  “I’m deeply saddened to learn that Cork has lost another legend, a true ambassador for Cork, both on and off stage.  Billa left a huge impression on generations of young Corkonians who remember him for his antics as the Dame in the Cork Opera House panto, and many more of us cannot hear the song “Beautiful City” without hearing his voice.  He left an indelible mark on the civic and cultural fabric of our beautiful city.  On behalf of the people of Cork, I extend deepest condolences to his wife Nell and his family.  Ar dheis Dé go raibh a anam dílis."

Members of the public can express their sympathy on www.corkcity.ie/bookofcondolences.