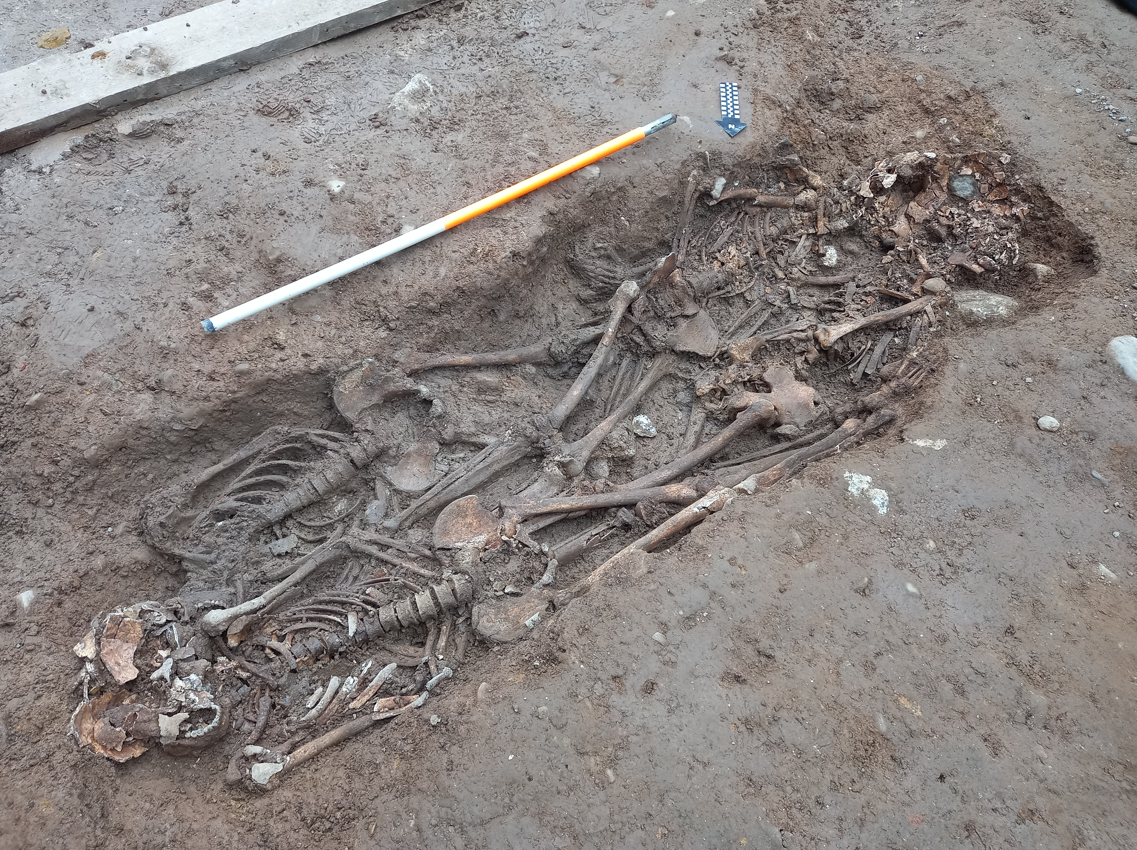 Archaeological investigations at, and adjoining, the site of the former Nancy Spain’s Public House, Barrack Street, Cork, have revealed unprecedented insights into the turbulent history and evolution of the country’s southern capital. The discoveries relate to two separate and distinct periods of Cork’s history.

The first discovery relates to a previously unknown exceptionally large defensive cut feature (ditch) which has been dated, through radiocarbon dating, to the period between the early 11th and mid-12th century, a time when the city was being developed by the Hiberno-Scandinavians – descendants of the Vikings who had intermixed with native Irish people.

The second discovery relates to the burials of six individuals who were uncovered within footprint of No. 48 Barrack Street (former Nancy Spain’s Public House). The skeletal remains of four of these individuals were uncovered within a mass burial pit and had evidently met a violent end. Small fragments of bone taken from two of the skeletons to facilitate radiocarbon dating have returned dates from the period between AD 1447 and 1636.

It is hoped that ongoing post-excavation work will provide greater clarity and accuracy on burial date of the revealed individuals.

The archaeological excavation revealed a section of a ditch measuring 24m in length (northwest to southeast), up to 9.6m wide and up to 2.9m deep.

“The uncovering of the ditch feature at the Barrack Street site is a highly significant archaeological discovery for the city of Cork. This area formed part of the suburbs of the medieval city and is therefore of important historical and archaeological significance. The ditch, which is exceptionally large in size, was not known about prior to excavation. There is no record in the historical sources, neither documentary nor cartographic, of the existence of such a substantial feature in this part of the city.”

The results of the radiocarbon dating would appear to suggest an association with the Hiberno-Scandinavian settlement, which has been proven through archaeological research, to have developed in the South Main Street area and the southern end of Barrack Street. Excavations at the Flying Enterprise by Sheila Lane and Deborah Sutton revealed a trackway from 1085. On the opposite side of the river, the recent excavation of the former Beamish and Crawford site by Dr. Maurice Hurley exposed the earliest evidence to date of an organised street layout in Cork. The earliest house levels were dendrochronologically dated to circa AD 1070. On the opposite side of the South Main Street, excavations undertaken by UCC at the old Sir Henry’s site and by Deborah Sutton and Máire Ní Loingsigh for Sheila Lane & Associates at the adjoining Citi Carpark site in the early 2000’s revealed similar medieval street fronting houses.

Mr David Murphy, the archaeologist who excavated the site, states the following:

“The Barrack Street ditch discovery raises new questions on the extent of the late 11th / early 12th century Hiberno-Scandinavian settlement in Cork. The archaeological and historical evidence indicates that Cork’s urban roots tentatively developed during the latter half of the 11th century in an area which straddled the south channel of the Lee, encompassing the northern end of present-day Barrack Street, the area immediately south of Sullivan’s Quay in the vicinity of St. Nicholas’ church and the southern tip of the newly reclaimed south island within the reed marsh estuary. While there is a growing corpus of evidence relating to the Hiberno-Scandinavian settlement on the south island, the actual extent of settlement on the south bank of the Lee is still unclear. The presence of this defensive ditch feature, some 300 metres upslope and to the southwest of the accepted area of settlement, may suggest that the settlement was more extensive than previously thought.”

“Alternatively, and perhaps more likely, is that a defensive ditch feature, which enclosed the lower lying settlement, was dug into the higher ridgeline above the riverside settlement. The ability to defend the higher ground above the settlement would dispossess any potential attackers of a significant strategic advantage. If this theory is correct, the ditch would most likely extend in an elongated curved manner and roughly follow the alignment of Vicar Street and Tower Street for a portion of its route.”

Following the attendance of the relevant authorities and discussions with the City Coroner and State Pathologist, all parties were satisfied that the revealed remains were historical in nature. Archaeological excavation of the area took place in October 2021 and was directed by David Murphy with the assistance of osteo-archaeologist Niamh Daly.

The excavation initially uncovered the partial and heavily fragmented skeletal remains of two individuals (Skeletons 1 and 6) directly underlying a rubble layer near the party wall with No. 49 Barrack Street. As the excavation progressed a shallow mass burial pit, containing the fully intact and articulated skeletal remains of a further four individuals (Skeletons, 2, 3, 4 & 5), was revealed circa 4m to the north-northeast of the initial discoveries. The individuals had been buried in a ‘head to toe’ manner.

“The context of the burials and the way they were placed in the burial pit indicates that they were not treated in a respectful manner. In fact, it was evident that all four individuals were buried in a manner which suggests that the hands/wrists were bound behind the backs, and it is likely that the feet/ankles were also bound”.

Post-excavation work is ongoing but laboratory analysis by Ms Daly has revealed that all six individuals were male. Skeletons 1, 3 & 4 were young adults aged approximately between 18 and 25.

The estimated sex, age and the nature and position of burial points to a military connection for the revealed remains. The period of death indicated by the radiocarbon dating was a turbulent and violent time in Irish history, with Munster and Cork the focus of several significant events. Such events included the first Desmond Rebellion (1569 – 1573), the second Desmond Rebellion (1579 – 1583), the Nine Years War (1593 – 1603) which culminated with the Battle of Kinsale, and a revolt in Cork City in 1603. This revolt followed the death of Elizabeth I and saw the citizens of Cork uprising against English rule and even saw the precursor to Elizabeth Fort, located only 80m from the burial site, burnt down. The revolt continued for a month before it was quelled by English reinforcements.

Whichever event led to the deaths of the six individuals discovered in Barrack Street, what is certain is that based on the nature of the burial positions within the shallow graves they met a violent and gruesome end.