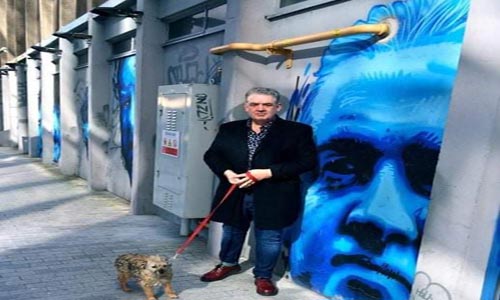 St. Patrick's Day 2020 was like no other: the bunting was hoisted, the shamrock harvested, marching bands were ready to take to the streets. Right across the planet from the Pyramids at Giza to the Eiffel Tower in Paris iconic structures would be illuminated like the Emerald City of Oz and the mighty rivers of the world were poised, set and ready to run green for just one day. But then, without warning, St. Patrick's Day was cancelled.

A global pandemic had been declared. The World Health Organisation announced that many would die. Drastic and immediate action was required. The economy shut down. Schools closed. Those who turned to God for comfort found the church doors locked. All we could do was to look on hopelessly, helplessly in horror, as night after night, dystopian images of deserted iconic cityscapes flashed across our television screens.

The message was clear. We had two options; stay at home and “Flatten the Curve” or continue recklessly, unchecked and “Cull the Herd”. Thankfully, when faced with an impending crisis, we humans have the dual facility to act as a herd or as a pack. The difference is subtle but distinct. Simply put, herd behaviour is reactive, whereas, pack instinct is proactive.

Scientific experts quickly determined that our most effective defence would be to revert to our primordial pack instinct. And so, our societal order was restructured. We were to isolate from the herd and regroup into small sustainable packs, typically family groups. These self-sufficient packs would function independently, but with common goals towards the greater good.

The directive to stay apart seemed counterintuitive. Ever since humankind first walked the planet, the survival of our species had always depended on our ability to work in cooperation. Instinctively we knew that in times of trouble people should rally together, stand shoulder to shoulder, because there was always safety in numbers.

But yet, on St Patrick's Day, March 17th 2020, when Taoiseach Leo Varadkar announced in his address to the nation:  "we must come together as a nation by staying apart from each other." The words resonated profoundly deep within the Irish psyche. Words that reverberated into our far distant past, words that seemed to awaken a long forgotten echo to a time when St. Patrick walked the land. It set me thinking, who was this Patrick? What magic did he possess? What powers did he evoke to convince the pagan Irish to take him to their hearts?

Patrick was a firebrand. He was fearless and articulate. He challenged chieftains and succeeded in persuading devout pagans to renounce their Gods and convert to the Christian Holy Trinity with nothing but a three-leafed shamrock in his hand. Patrick was a trailblazer. He was a larger-than-life myth maker – banishing snakes and lake monsters was his stock and trade.

Of course, snakes were never indigenous to Ireland, so I assume their extradition is a metaphor for the expulsion of Pagan Gods from ancient sites of worship – just as Cork's own St Finbarr banished the lake monster Lú from Gougane Barra.

The year of Patrick's death is unknown. But, surprisingly, the precise date of his death, 17th March, conveniently coincides with the feast day of the Pagan Goddess, Síle, which is aligned with the equinox. This is a highly significant time in the Pagan calendar. The days grow longer, green shoots and buds begin to appear, there is a sense of rising sap and the warmth of life-giving sun creates a palpable change in the earth.

Pagan Ireland was acutely aware of Nature. Finely tuned, like clockwork, they followed the seasons religiously: a time to plant, a time to harvest, a time to chop wood, a time to store food. It was precisely this need to provide for the lean winter months that inspired the ancient Irish tradition of Meitheal – the coming together of individuals to pool resources and work collectively in anticipation of the inevitable austerity of Winter.

As the earth travelled around the sun, and the days shortened, our ancestors instinctively knew when it was time to separate from the herd again and isolate. And so, once again they prepared for the splendid isolation of the hiberno-hibernation. A time when families would literally go into lockdown, gather around the fire, tell stories and sleep. Winter was a time of scarcity, a time of darkness, a time of ill-winds, infection and illness. It was a dangerous time and without proper precaution whole families could be wiped off the face of the earth. It was a time to care for the elderly and infirm until Lá An Bó Ríabhach [The day of the old cow]. On reaching Lá An Bó Ríabhach, a nonspecific day in late March also aligned to the equinox, it signalled that the worst of winter weather was past, Spring was in the air and the elderly and infirm would find the strength to live for another year.

The Goddess, Síle, awakes from her slumber as the families emerge from their winter lockdown. Energised by the overpowering sense of regrowth and rebirth, it is time to plough, time to plant. It is a time for people to come together, in a new cycle of life and fertility, and so the tradition of Meitheal begins all over again.

These days the Goddess, Síle, is somewhat lost to the collective memory, yet she is still recognisable by the many ancient stone effigies commonly known as Síle na Gig - described as a powerful representation of the female form, typically with legs splayed and genitalia accentuated and exposed. The research of historians Brendan Matthews and Shane Lehane confirm that the devotion to the Goddess Síle was still very much in force in the relatively recent past, as see in these reports from the mid-1800s. The Drogheda Argus reports that the local highwayman Michael Collier was involved in drunken and rowdy behaviour in Stanmullen while celebrating St. Síle's Day 1831. Meanwhile, a decade later, The Freeman's Journal of March 20th 1841, reported the case of a woman before the courts charged with public drunkenness. Her only defence was that she, "didn't wish to break the old custom of taking a drop on St. Síle's Day."

So here we are, St. Patrick's Day 2021. It occurs to me that maybe St. Patrick did not convince the Pagan Irish to change our Gods, we only changed their names. Maybe the time has come to reclaim our ancient female Pagan past.

"You know we've travelled all around the Sun

You know it's taken us one whole year