Michael is a native of Cork who lives and works in the city. An avid collector of memorabilia. He owns a large library of Cork books, photographs, postcards and maps, which have taken over 40 years to amass. He is also an author and his previous publications include, Hidden Cork (2009), Pure Cork (2011) and Cork Burning (2018) 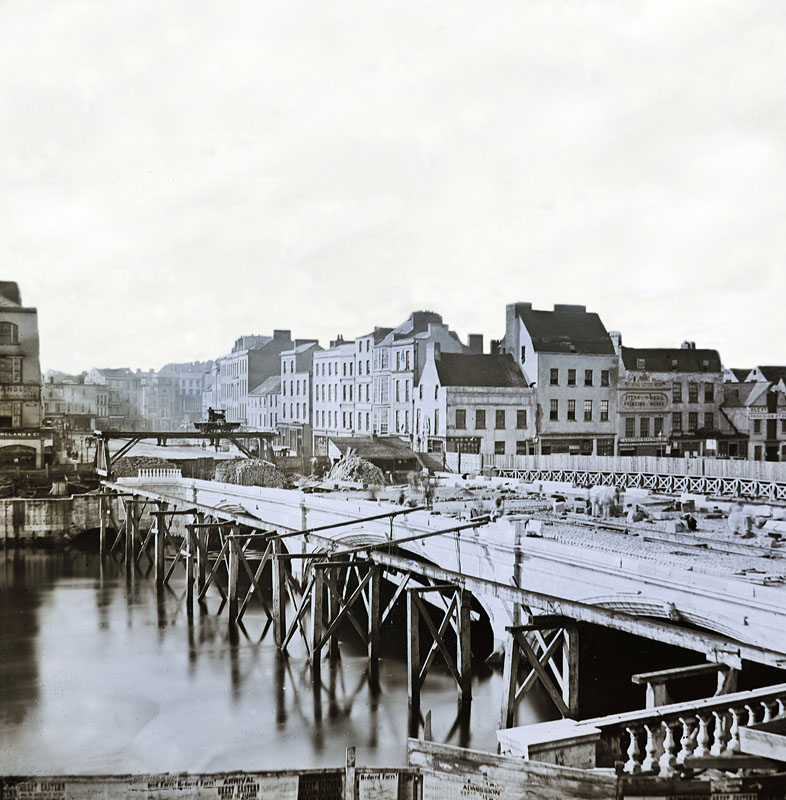 An early photograph of St. Patrick’s Bridge during construction. From the poster in the foreground we can deduce that the ship the Great Eastern has arrived in Queenstown (now Cobh). This fortunately gives us the date when this photograph was taken, as this ship received temporary repairs in September 1861. During the building of St. Patrick’s Bridge up to one hundred stone cutters and masons were employed. In November 1859 the foundation stone was laid by the Lord Lieutenant of Ireland, the Earl of Carlisle. On 27 May 1859 a temporary wooden pedestrian bridge was erected. Just three months after this photograph was taken, on 12 December 1861, the new St. Patrick’s Bridge was officially opened to the public and it was equipped with ornate gas lamps.

View of the Provincial Bank and Anglesea Bridge (Parnell Bridge) 1865.

This photograph shows the old stone Anglesea Bridge and the former Provincial Bank then under construction. The chief engineer of Anglesea Bridge was Thomas Deane and it was completed in 1830. It was built principally to allow access to the old Corn Exchange building which opened in 1833 (now the site of Cork City Hall). By 1863 the bridge was becoming an impediment to river traffic. On 10 October 1863 a ship became wedged in the constricted archway of the bridge effectively closing access to and from the river. This bridge was not replaced until 1882 with the construction of the Parnell swivel bridge. The Provincial Bank, built in the Victorian Renaissance style and designed by the Architect W. G. Murray, was completed in 1865. It is constructed of limestone and sports wonderful Corinthian columns, keystones and pediments. This photograph can be dated to 1865 as the workmen’s trestles are still in position prior to its opening.

As early as 1825 Fr. Mathew decided that a new church should be built in the city. The foundation stone was laid on 10 October 1832, Fr. Mathew’s birthday. The site chosen was Charlotte Quay (now Fr. Mathew Quay). The original design by the architect George R Pain had a 182 foot tower and spire. Unfortunately the project was plagued with problems due to its location near the river. This was compounded by the 1832 Cholera epidemic in the city which decimated any attempts at fund raising for the church. Lawsuits involving the architect, cost over-runs and the great Famine further hindered its construction. By 1850, the architect Sir Thomas Deane was employed to complete the church albeit without the tower and spire. The architect William Atkins was engaged to oversee the completion of the interior.

The National Steeplechase was held in Cork Park Racecourse in 1869, and the prize money was a then-considerable £200. Such was its popularity that thousands arrived, but unfortunately the weather made the course wet and muddy - not the ideal conditions for horse racing. On 27 February, the owners of the Cork Park Racecourse sold the land to Henry Ford for the sum of £11,500 and a nominal rent of 1 penny per year. This involved the building of a road through the centre of the racecourse which is now Centre Park Road. The last race took place on Easter Monday 1917 and the construction of Henry Ford’s tractor factory commenced shortly after.

In 1848 the Cork Corporation leased land for the construction of the Cork Blackrock & Passage Railway covering an area of 1000 feet in length and 100 feet wide along the line of the embankment. On the 8 June 1850 the new terminus building in the photograph was erected on the corner of Victoria Road and the Navigation Walk South Jetties, where the grain silos now stand. The Builder magazine of June described it as a plain Italian building with a large crowning cornice and a very flat pitched roof. The material used was brick coated with Portland cement and a very light roof spans the platforms and tracks. The Architect was Mr. Hargreaves and the builder was a Mr. Moloney. It is recorded that in 1869 Mr. Clancy fell down the steps of the booking office and that he was compensated with a free pass for one year. By January 1879 the old station was no longer in use as the railway had been rerouted to Albert Road. The old station became part of Messrs. Furlong’s flour milling operation until its demolition in the early 1930s.

The old St. Finbarre’s Cathedral was built in 1735 in the old renaissance style. The cathedral in the photograph has parts of the tower and spire from the previous cathedral, which had been damaged during the siege of Cork in 1690, incorporated into the design. When this cathedral was being demolished a beautiful English doorway was removed and rebuilt into the South wall in Dean Street.  Thomas Lane, who was skilled in the art of photography, and the learned Dr. Richard Caulfield, Cork’s premier historian, published a photographic book about the City in 1866. This photograph was taken from the Bishop’s Palace opposite, just prior to its demolition in 1865. The image was taken at 10.20 and it clearly shows that the old weather vane is missing from the top of the spire.

The steamer Blarney passing the old St. George Steam Packet Company. On the left is the Cork Bonded Warehouses on Custom Quay. The SS. Blarney worked on the Cork-Bristol route until it was sold in 1910. The ship was built in 1889 and was a single screw steamer with a triple expansion engine. This area where the North and South channels meet is known as the tongue.

This extremely rare photograph is of the Cork Glasshouse chimney, which was once a major landmark on the south side of the city. It was located on the grounds of the Beamish & Crawford brewery, having been acquired by them following the closure of the glass factory. The Cork Glasshouse Company was Cork’s first glass factory founded in 1782 by Thomas Burnett, Francis Rowe, and Atwell Hayes. Skilled English glass workers were employed to oversee the new works. The company experienced differing fortunes, changing hands many times. Access by river for transport to the works and the introduction of steam driven machinery ensured its survival until 1818. Strong competition from the other local glass companies, mass produced English glass and excessive taxation all played a role in its closure. The chimney, which had been used as a coal store, was ultimately demolished in 1915. The enormity of the structure is evident from the photograph: the inside diameter was 50 feet and the walls at ground level were 4 feet thick.

This photograph shows King Edward VII and Queen Alexandria in their royal carriage passing the premises of George Southwick, a boot manufacturer at 51 South Mall Cork in 1903. The people peering through the windows are on the first floor premises of Herr Theo Gmur, Professor of Music. The King and Queen were on their way to visit The Greater Cork Exhibition of that year amidst great pomp and ceremony, much to the delight of the local aristocracy and public officials. The enormity of the wheels of the royal carriage in relation to the people onlooking conveys their insignificance amidst this imperial pageantry.