John Fitzgerald Bard of the Lee

(Above) Portrait of John Fitzgerald

John Fitzgerald was, during his lifetime, one of the most famous Cork men alive. Amongst his many talents, he was a wood-carver, cabinet maker, poet, historian, artist and antiquarian who left his mark on 19th century Cork. Born in 1825 on Hanover Street, he went to Blackamoor Lane School (aka ‘Fr Mathew’s School’) as well as the nearby Christian Brothers at Sullivan’s Quay (established in 1828). He later continued his education at the North Monastery (North Mon), where he studied under the well-known scientist, Brother Burke.

He initially moved to London in 1840 to apprentice with his brother-in-law, Michael Murphy. He returned to Cork in 1841 and initially took up work at the chemistry department at Queen’s College Cork (UCC). In 1842, he returned to working as a cabinet maker with Cornelius O’Keeffe on Grattan Street. He also taught at the School of Art (now the Crawford Art Gallery). He also worked at the Cork Examiner. He was superintendent in the wood-carving department at the 1853 Dublin Exhibition and won first prize for two woodcarvings of shields. 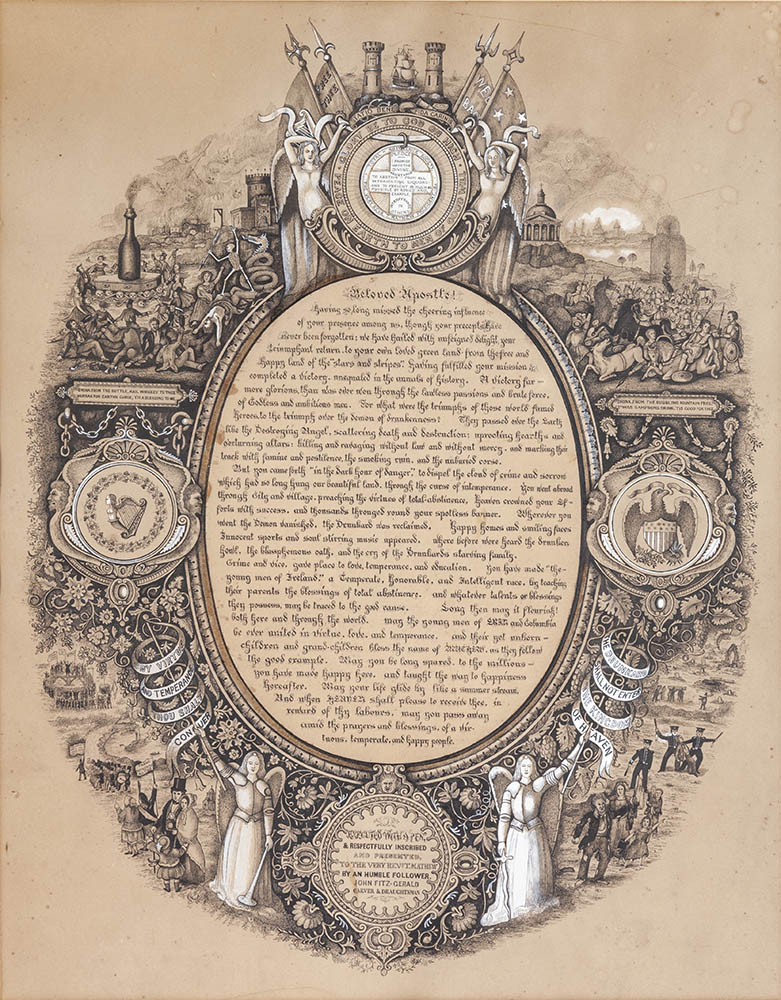 (Above) Illuminated address: 'Beloved Apostle', a dedication to Fr. Mathew, by John Fitzgerald.

Fitzgerald was also beloved as a poet and was known locally as the ‘bard of the Lee’. The publication Gems of Cork (1883) contains many of his poetry. A collection of his writings Legends, ballads and songs of the Lee was published in 1882. One of his best-known compositions was The Green Hills of Cork aka Beautiful City – My home by the Lee. He has in the past been credited as the author of The Banks of My Own Lovely Lee but there is no definitive proof of this.

Fitzgerald was also a devoted antiquarian who researched and wrote a great deal on Cork’s past. His knowledge and familiarity with Cork’s laneways, streets, ancient structures, and inscriptions allowed him to produce stories, prose, and poetry that celebrated and revived Cork’s legends and traditions for a contemporary audience. He was a council member of the Cork Historical and Archaeological Society and contributed many articles on antiquarian matters to the society’s journal. 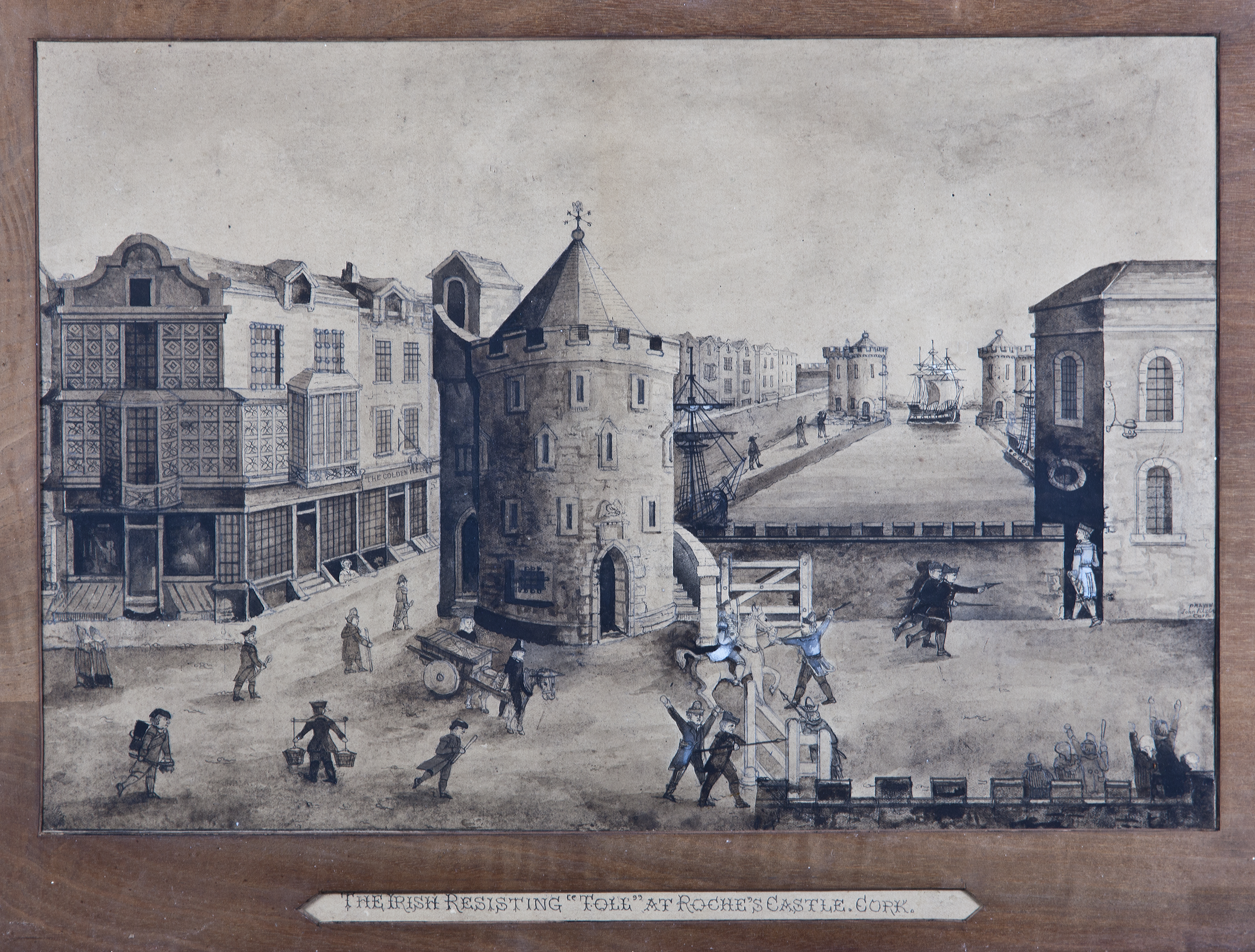 (Above) Drawing: 'The Irish Resisting The Toll at Roches Castle Cork' by John Fitzgerald. 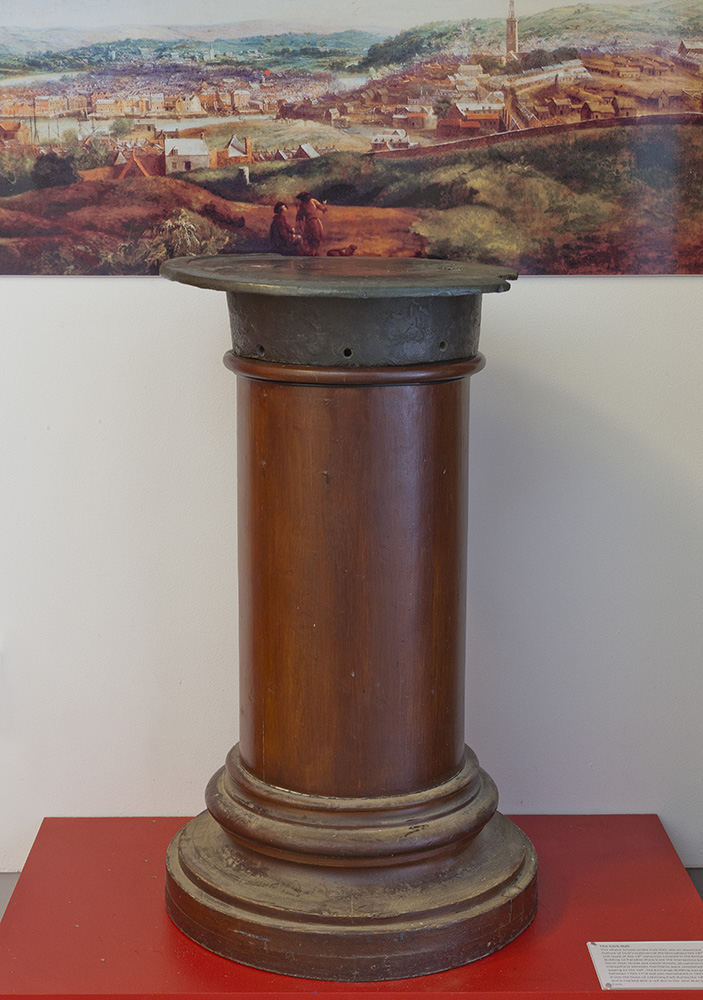 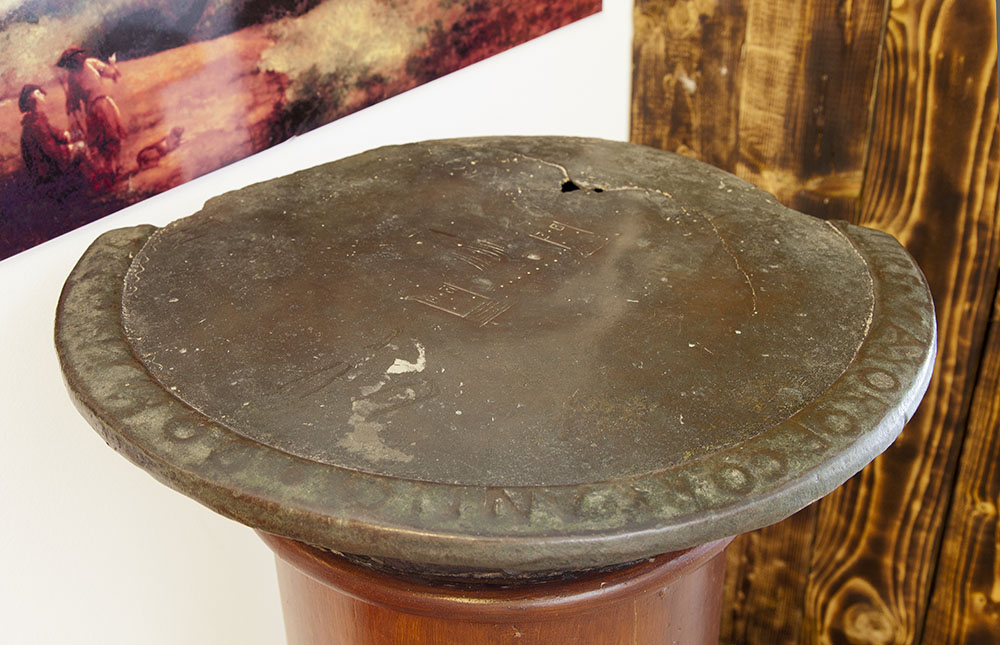 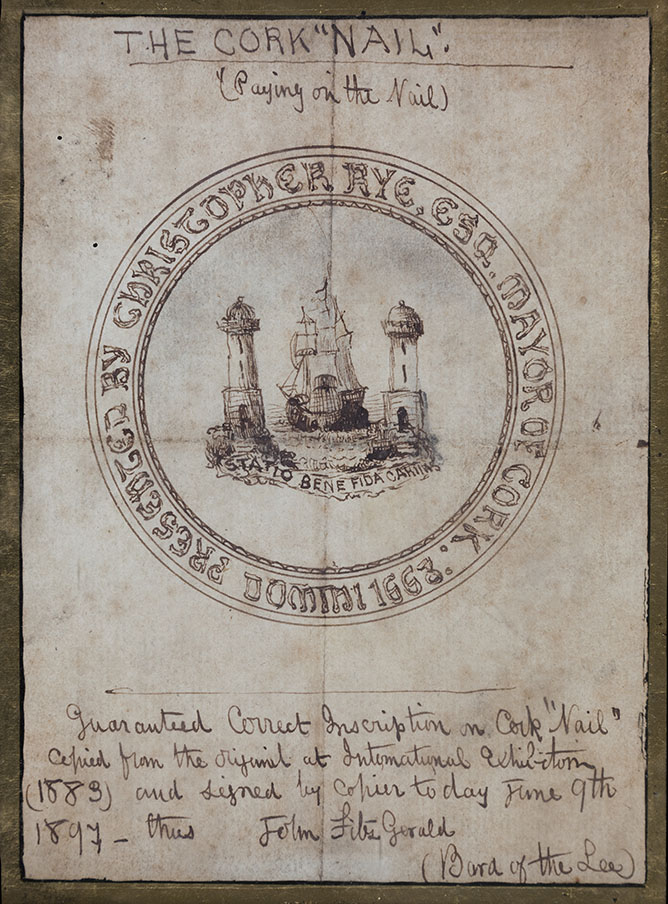 (Above) The Cork Nail, located at Cork Public Museum

(Middle) Close-up of the Cork Nail

He was also an artist of great skill who made some striking drawings and paintings inspired by his love of Cork’s ancient past. Examples of his work can be found at Cork Public Museum and the Crawford Art Gallery. In many cases, these images, despite questions about their accuracy, are the only visual representation of medieval Cork, its buildings and layout. They offer a wonderful insight into life with Cork’s medieval walls.

The Bard of the Lee died in May 1910 and is interred at St. Joseph’s Cemetery. 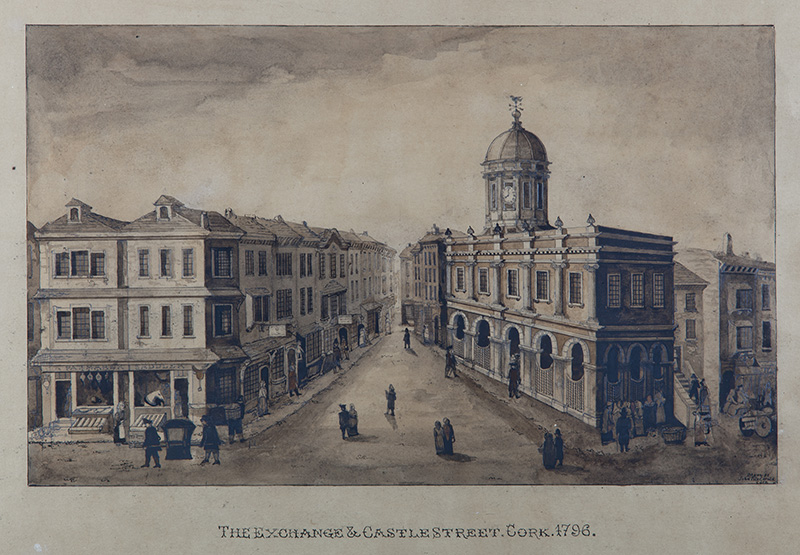 (Above) Drawing 'The Exchange and Castle Street 1796' by John Fitzgerald

The Green Hills of Cork by John Fitzgerald (Verse 1)

I have sought to discover a haven of rest

Where the sun sinks by night in the

land of the West

I have dwelt with the red man in the

Or the wild rolling prairie be

I have hied to the north where the

‘Mid the wolf and the

bear and the bleak winter snows

I have roamed through all climates but

none I could see

Cork and my home by the Lee

Beautiful city, my home by the Lee 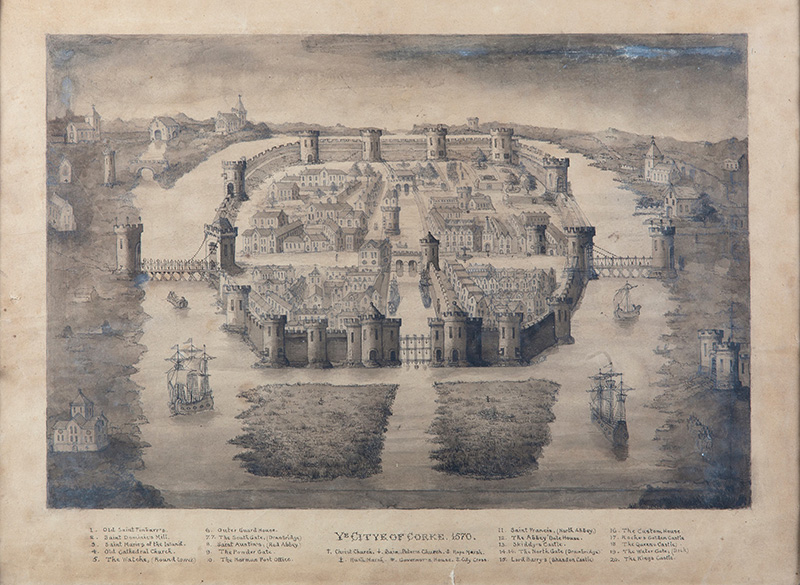 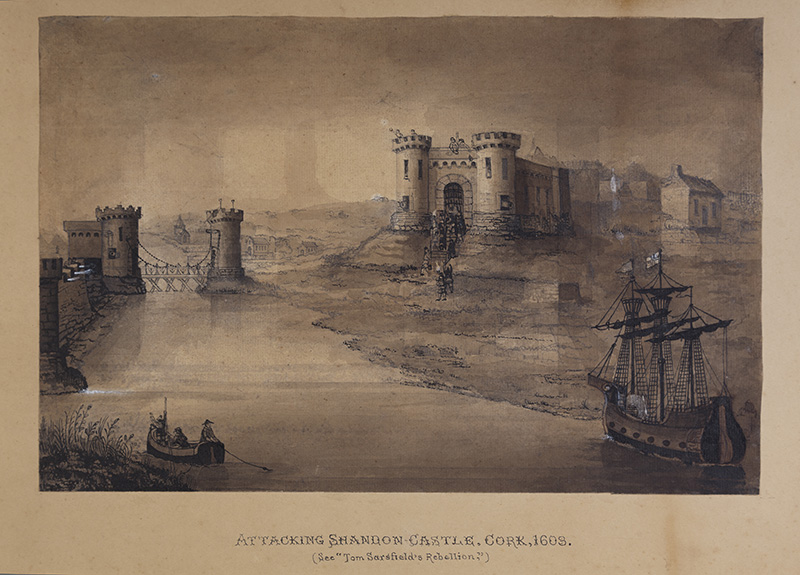 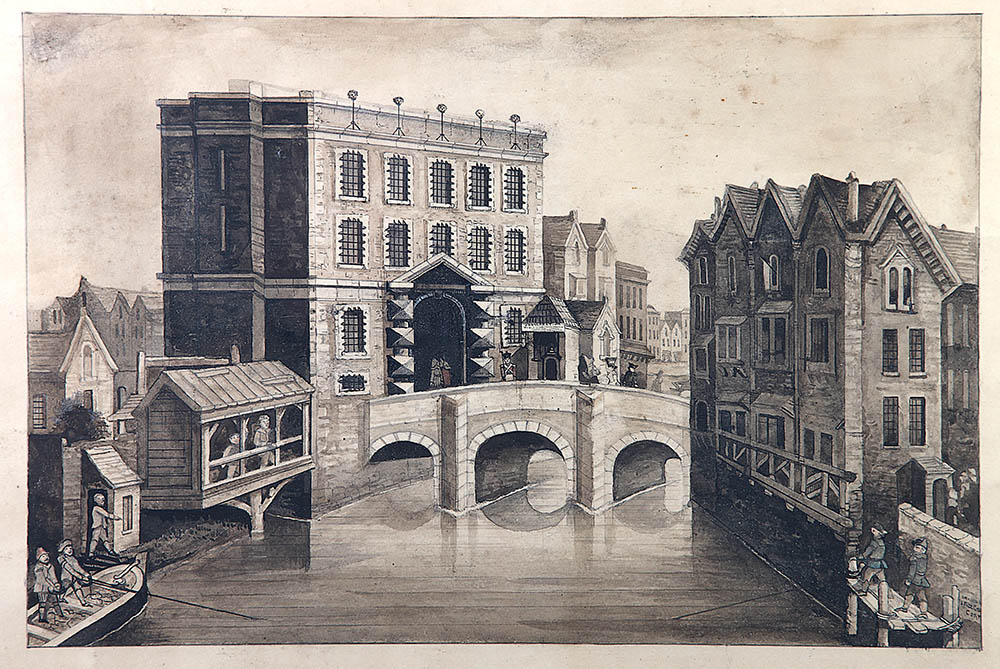