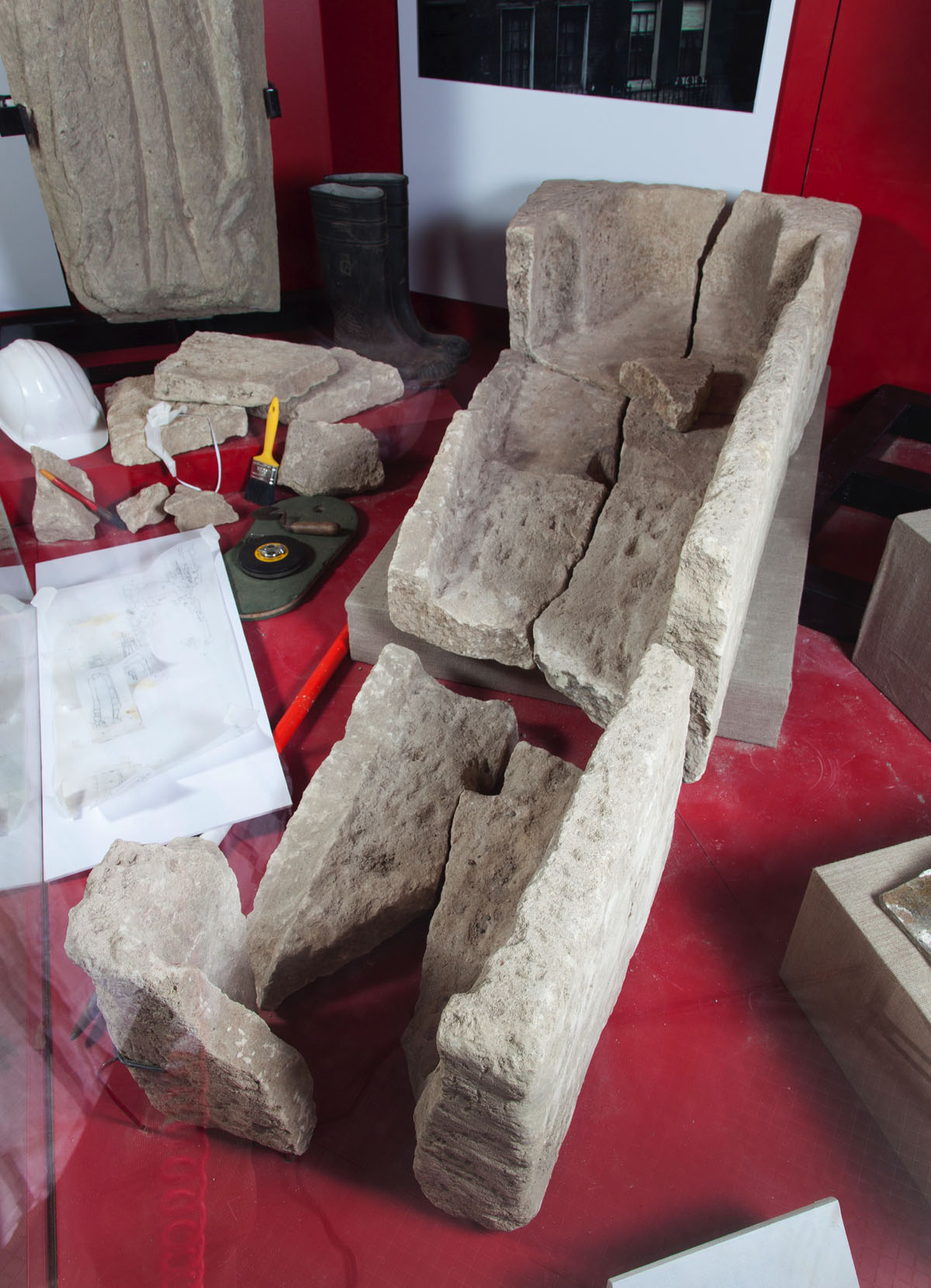 This medieval sarcophagus and effigy were excavated from the site of St Mary’s of the Isle, a medieval Dominican convent in Cork. The convent was vitally located on the south channel between South Gate Bridge and St. Finbarr’s Cathedral, placing it in close proximity to the local seat of political and episcopal power. It was established in 1229, making it one of the earlier group houses of the Dominican order in Ireland.

One of the main functions of the priory was as a burial place, and excavations in 1993 revealed hundreds of graves within the old church and claustral grounds. Most of the graves were typical of the simple types found in Ireland during the medieval period, such as unlined graves where the deceased were bound up in shrouds, stone lined graves and a few wooden coffins. Notably, a single stone sarcophagus, or stone coffin, was discovered in the nave of the church. Sarcophagi were made as funerary monuments to symbolise prestigious or wealthy individuals,

This sarcophagus consists of a rectangular exterior and a wedge-shaped interior, distinguished by the penannular head recess where the head of the deceased would rest. There are two holes cut through the floor of the sarcophagus, and these are drainage holes to allow the bodily fluids and gasses of the deceased to exit following burial.

The sarcophagus was carved from a single piece of Dundry stone, named after the location where it was quarried near Bristol. This limestone was extensively exploited during the medieval period and was imported to many sites along the south and east coast of Ireland, including Cork. The stone became a valuable commodity to Irish builders and stone-carvers, as it was durable and easy to carve.

The occurrence of a stone sarcophagus in St Mary’s of the Isle, is significant because sarcophagi burials were unknown in Ireland, and particularly in Munster, until the influence of the Anglo-Normans from the 12th century onwards. This sarcophagus reveals that this influence from European burial traditions extended to medieval Cork, probably because of Cork’s trade connections to port cities abroad. These ports include Bristol, where much of England’s trade with Ireland was handled, and this economic relationship can be seen at St Mary’s of the Isle, which used a significant amount of Dundry stone in its art and architecture. 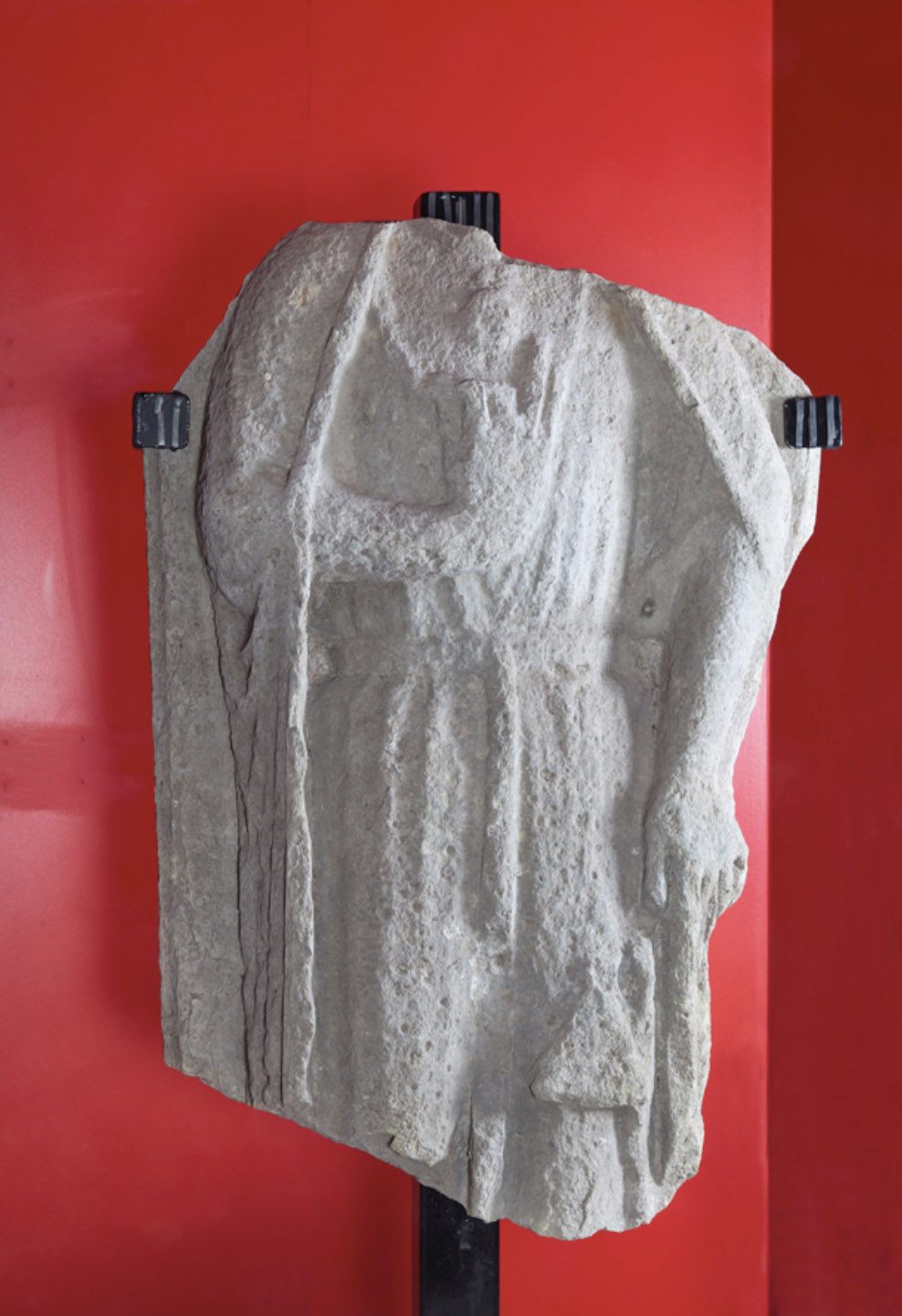 Found during excavations on the grounds of St Mary’s of the Isle, a medieval Dominican convent in Cork, this broken effigy represents the growing trend in medieval Ireland to adopt English funerary traditions following the 12th century Anglo-Norman invasion. Effigies are sculptural representations of the deceased that are carved on a memorial slab and placed on top of a tomb. This effigy shares similar characteristics with other effigies throughout Europe and is thought to have been carved in the late 13th century during the peak period of Anglo-Norman impact.

The surviving torso reveals a considerable amount about the original design of the effigy. The figure wears a long gown, distinguished by vertical pleats and sinched at the waist with a belt, with a cloak draped over the shoulders. The right hand reaches up to grasp the cords of the cloak, while the left arm hangs down the side with the hand holding a rectangular object. This object could be a needle case, a knife or the cloak’s hem. While most of the clothing seen here is commonly depicted on European effigies of the 13th-14th century, the triangular purse that hangs over the figures left thigh is less common. It could be a symbol of wealth or charity, and is possibly an alms-purse that was used to keep coins for giving to the poor. These sculptural details would have been easier to recognize with the addition of colour, which medieval tradition suggests was applied in Ireland.

In medieval Ireland effigies marked the burials of wealthy or important individuals, and the most common form are effigies of knights. The example from St Mary of the Isle, therefore, is noteworthy as it is one of the rarer civilian effigies. Consistent in style to other effigy designs in Europe, this effigy is symbolic of Cork’s changing traditions as it became influenced by European customs.