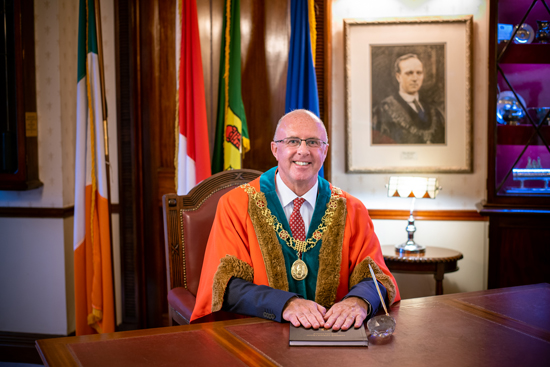 The Lord Mayor of Cork, Cllr. Joe Kavanagh, has written to An Taoiseach Micheál Martin today, extending an invitation to him to pay a courtesy visit to Cork City Hall and to attend a Special Meeting of Council.

The Lord Mayor said: “I wish to express my congratulations to An Taoiseach on his appointment – it is a great honour, and I wish Mícheál every success in the role.”

Councillor Kavanagh went on to highlight the significance of the occasion. “The office of Lord Mayor is very special, but is especially so this year when the City is commemorating the historic events of 1920. As Lord Mayor, and as the Taoiseach previously did, I am now following in the footsteps of MacCurtain and McSwiney and it is now my great privilege to invite him back to City Hall for a historic courtesy visit and to attend a Special Meeting of Council to mark the historic occasion.”

“We look forward in the coming weeks to meeting and engaging with the Ministers in relation to the strategic role that Cork City will play as the economic driver for the southern region in what is such a critical juncture for the Irish Economy,” said the Lord Mayor.